Research: Gays In The Headlines, Comparing Russia And Germany 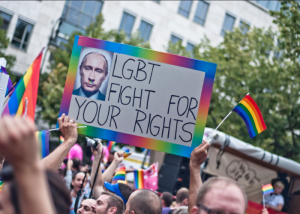 If you try typing the terms ‘homosexuality’ or ‘gay’ into Yandex News, Russia’s most widely-used search engine, no results will be displayed. Readers are given the impression that these themes do not exist in the country’s mass media, but this is far from the truth. Reports on homosexuality are occasionally published, yet Russia’s largest search engine seems to be programmed to ensure these stories never appear.

When a person types ‘Homosexualität’ into the German version of Google news, they receive diverse links to dozens of recently published articles, including from major German outlets such as BILD, Die Welt, FAZ and Berliner Morgenpost. While the German reports range from highly tolerant, to questioning of homosexuality, it is not a taboo subject – as it is in Russia.

Well, not exactly. But Russian media calls for citizens to turn away from what it calls “Gayrope” (a combination of ‘gay’ and ‘Europe’). The term is widely used in Russia, in an attempt to cast  Europe’s tolerance of homosexuality in a comical light. In talk shows, the expression is often used as a core argument against the European Union and its democratic principles.

Day after day, the following thoughts are expressed in Russia’s media: Europe is a dying civilization; immorality rules in Europe; there are many perverts there who want to legalise incest, zoophilia and paedophilia. Sometimes “Gayrope” includes the assertion that Europe is 100% gay.

Vitali Milonov, a Russian politician from the Putin party, Edinaja Rossia, has become a national hero with his extreme statements. He aims to take Madonna, Rammstein and Lady Gaga to court over their “homosexual propaganda.” He also turned to the Russian Ministry of Culture for help with his moral quest: the opera “A Summer Night’s Dream” by Benjamin Britten was to be examined for its references to homosexuality, paedophilia and drugs.

Despite the absurdity of most of these initiatives, they are accompanied by extensive media campaigns. The result is that “homosexuality” has become a dirty word in the minds of young people, as well as the older generation. In the public consciousness, “gay”, “paedophile” and “criminal” are more or less indistinguishable.

An investigation of the most read Russian online newspapers, Kommersant, Izvestia, Vedomosti and Komsomolskaja Pravda over the past two years shows that the most common term associated with homosexuality – ‘sexual minority’ – is discriminatory. In Russia’s media the term is also associated with illness, something “abnormal” or “unlawful”, and used in homophobic rhetoric.


It is striking that most of the reports on homosexuality were published before 2013, when Russia’s parliament unanimously adopted its law: “Propaganda of Non-Traditional Sexual Relations Between Minors.” Since the law was passed many journalists have preferred not to report on the topic at all.

The new law prohibits “homosexual propaganda” — meaning any positive (or neutral) statements on lesbian, gay, bisexual or transgender (LGBT) topics to be made in the presence of minors.

So-called “homosexual propaganda” also cannot be used in the media or on the internet.

Whoever disobeys faces a fine of a million rubles, (about 17,000 euros). When such “sinful” messages are expressed in the media, the publication or station can be closed for up to 90 days.

After 2013, the word homosexuality appeared in the business newspapers Kommersant and Vedomosti, but mainly in the cultural sections, and concentrated largely on film and book reviews. The country’s largest newspapers Izvestia and Komsomolskaja Pravda often report on homosexuality although it is mostly homophobic commentary by celebrities; Milonov’s initiatives in the Russian parliament and the discussion surrounding them; and how strongly homosexuality should be punished.

It is easy to find the following expressions in Russian media: “homosexuality is our inner enemy,” “Russia is the last stronghold of morality”, “An End to Sodomy”.

An example of some of the stories from the newspaper, Izvestia: “In the film about Eisenstein, there is too much information about the sexual orientation of the Soviet director. The piece should be reworked.” Or “Politicians warn: Tim Cook’s coming out can make homosexuality a trend for youth”. Should readers take such reports seriously? They may be tempted to laugh about it. But when they read it everyday, they lose sight of the absurdity and become accustomed, even welcoming the idea.

Homosexuality is not a taboo for the largest German newspapers, with many reports published daily on multiple aspects of the theme. German tabloid BILD often showcases gay love stories or reports on the daily lives of gay families. Even accompanying photos on articles with other themes are captioned with “gay details”.  For example, an article about the Academy Awards in the US stated “[Moderator Neil] Harris outed himself as gay in 2006, and since then has fought repeatedly for the rights and recognition of gays.”

The Süddeutsche Zeitung (SZ) has posed significantly sharper social questions on their website. They range from the relationship between homosexuality and the church in “The Pastor and His Husband” to “Homosexuality and Islam — Incompatible?” Since 2014, the paper has carried out a project called “How tolerant is Germany?”, in which over 3,500 readers were surveyed. Their answers were showcased through texts, interviews, videos and graphics.

Yet in contrast to the SZ, it’s possible to find homophobic articles in the Frankfurter Allgemeinen Zeitung (FAZ). The conservative daily has repeatedly spoken out against proposed plans for equality of gays and lesbians in education. Such ideas were deemed as a “re-education of society to homosexuals” and the “promotion of child abuse.” Yet, although the phrase “moral and ideological re-education” occurs often, the subject is not taboo.

Die Welt’s website contains its own section on homosexuality. It offers many news and background articles, such as on the gay lifestyle, coming out, marriage, and problems with the church. At the same time, it reports on homophobic social trends in Europe and the world. For example, it published the “Gay Travel Index 2015: The Most Dangerous Travel Destinations for Homosexuals” and articles on joint projects with the German AIDS Help.

Language and context impacts society’s perceptions of homosexuality. There are videos on YouTube in which the reporter asks people on the street, “Are You Hetrosexual?” Most of the respondents react indignantly, believing that hetrosexuality is something perverse. No wonder! Who really likes to be called a terminology from a medical dictionary? For the same reason, gays and lesbians rarely call themselves homosexual — at least not in everyday speech.

In 2013, the organisers of “Bok-o-Bok”, an international human rights theatre festival, published a brochure for journalists in Russia. It included suggestions and recommendations on how to correctly write about the gay community.

–”Homosexuality” instead of “Homosexualism” or “Homosexualist” — the “ism” and “ist” implies a pathology, as in “alcoholism.”
–Transexual people don’t “change their gender”, rather they correct it.
–The terms “Not correct sexual orientation” or “Sexual minorities” are not correct. Better is “homosexual” or simply “gay”.
–”Hetrosexual” instead of “Natural orientation.” According to the World Health Organisation since 1990, there are three types of sexual orientations: heterosexual, homosexual and bisexual.

This article was first published on the German EJO website and translated from the original German version by Rachel Stern.

Julia Grinerva is a freelance journalist based in Berlin and Moscow. She is also currently a European Journalism Fellow at Free University Berlin. Her year-long research project focuses on German and Russian media coverage of the anti-gay law in Russia, as well as LGBT politics in Germany.
» Media and Politics, Recent » Research: Gays In The Headlines, Comparing...