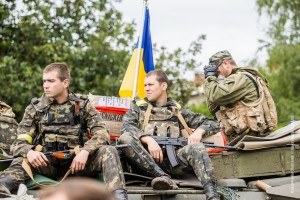 Important pan-European news stories, such as the Ukraine crisis, are often overlooked by Europe’s media – including the quality press – according to new research.  A comparative analysis of the conflict in Ukraine, conducted across 13 countries, reveals new information about barriers to the development of a European public sphere.

Significant variations between European countries in the amount of media coverage of Ukraine’s crisis were noted by researchers. They also found the media generally focused on the role played by President Putin in the conflict, rather than on international political issues surrounding the events in Ukraine.

Content analysis of two national opinion-forming newspapers in each country was conducted by university-based researchers. Analysis focused on four key political events in 2014: Euromaidan (February 18th); the Crimea referendum (March 16); the Eastern Ukraine referendum (May 11) and presidential elections (May 25).  All news items and opinion pieces were analysed in the three days leading to the event and the three days after.

The study revealed significant variations in the amount of coverage given to the crisis.  For example, while Polish and German newspapers each published more than 250 articles during the period studied, only 29 articles about the crisis appeared in Romanian newspapers in the same period.

In the Netherlands only 129 articles were published on Ukraine during the period studied.  However, as  Simon S. Knopper from Fontys University, points out, the Dutch media became significantly more engaged in the story later in the year, after the shooting down of Flight MH17 over Ukraine, on July 17 2014. Many Dutch nationals were among the 238 passengers and 15 crew killed.

In the United Kingdom only 129 articles on the Ukraine conflict were published in the two analysed newspapers (The Guardian and The Times) over the four dates studied.  Portuguese newspapers published many more articles – a total of 164 news items over the same period.

The results for the UK seem to reflect how UK national media follow European politics. The current government’s focus on domestic issues is reflected in the country’s media coverage.  Even the quality newspapers studied paid relatively little attention to the conflict in Ukraine, and thus failed to fulfil the ‘burglar alarm’ function American political scientist John Zaller ascribes to the media.

In Switzerland 237 articles were published about Ukraine during the four news events studied, with the business-oriented Neue Zürcher Zeitung providing much of the coverage.

In Central Eastern European countries, such as Latvia and the Czech Republic, with their painful memories of Soviet military intervention, relatively few articles about the conflict were published  (187 in Latvia and 174 in Czech Republic).

The most extensive coverage of the conflict in Eastern Ukraine was of course provided by Ukrainian media, with 923 articles. While most international media focused on politics, Ukrainian outlets also reported on domestic events, as well as the economic consequences of the conflict for the country.

European media generally treated EU actors as less relevant, compared to key political figures from Ukraine and Russia.  The individual most featured in the coverage across Europe is Vladimir Putin (9.1% of all references). Actors from EU countries, the EU and other international organisations, as well as the US, together make up less than one fourth of the political figures mentioned.

Even though press freedom is firmly established in the EU treaty, our research appears to confirm the criticism the EU High-Level Group on Media Freedom and Pluralism in Europe directed to Central Eastern (and Southern European) media in 2013. The Group’s report concluded that press freedom and pluralism had been compromised in some countries in the region due to political influence and commercial pressure.

According to Liga Ozolina from Turiba University in Riga and Roman Hajek from the Charles University in Prague, EJO editors who analysed Ukraine coverage in Latvia and Czech Republic over the period studied, both Latvia’s Avīze, and the Czech paper, Právo, appear to have been considerably influenced by their respective national governments’ political position on Ukraine.

The initial lack of attention to the conflict in the Romanian, but also in Serbian and Albanian newspapers, was likely to have been partly due to the lack of resources, even in top national papers, to maintain comprehensive foreign coverage.  After the Romanian newspaper, Adevarul, sent a ‘parachute correspondent’ to Kyiv, coverage increased exponentially, and dominated the paper’s foreign agenda afterwards, Raluca Radu, of EJO Romania and Bucharest University, explains.

Coverage in Russia: Euromaidan and the Sochi Olympics

In Russia, Ukraine only started to receive media attention after Viktor Yanukovich was removed from power at the end of February 2014.  For example, the Euromaidan events that preceded Yanukovich’s departure were barely covered in Russia.  While an average of 20% of articles were published in other countries about the Euromaidan protests, only 3% were published in Russian newspapers studied, (state-owned Rossiyskaya Gazeta and in the country’s business-oriented and liberal Komersant).

However, the Crimea referendum, held one month after Yanukovich left Ukraine, received more attention in Russian newspapers compared to the 13-country average.

According to Anna Litvinenko, a researcher at Freie University, Berlin, formerly based at St Petersburg State University, the Russian media probably downplayed Euromaidan because the events clashed with the Sochi Olympic Games.  Russian reporters were occupied within Russia and few were in Kyiv and may explain why coverage was limited.

Notably, there were few differences in coverage of the Ukraine crisis between Russia’s pro-governmental Rossiyskaya Gazeta and the country’s liberal newspaper, Kommersant.   Both carried similar amounts of coverage and positioned the story in similar ways.  Litvinenko said unified agenda setting factors work within Russia’s media landscape, affecting both pro-government and opposition media: the framing of the events may be different, but the amount and focus of coverage are more or less similar, she added.

Susanne Fengler is a professor of international journalism at the University of Dortmund, director of the Erich Brost Institute for International Journalism and the project director of the German EJO. Marcus Kreutler is a fellow of the School of International and Intercultural Communication (SIIC), a joint project of the alliance between Ruhr University Bochum, TU Dortmund, and the University of Duisburg-Essen (UA Ruhr) in the field of communication, media, and journalism studies, and a project team member of the Erich Brost Institute. Tina Bettels-Schwabbauer is the editor of the German EJO site.
» Media and Politics, Recent, Research » Research: Europe’s Media Ignore Pan-European News...