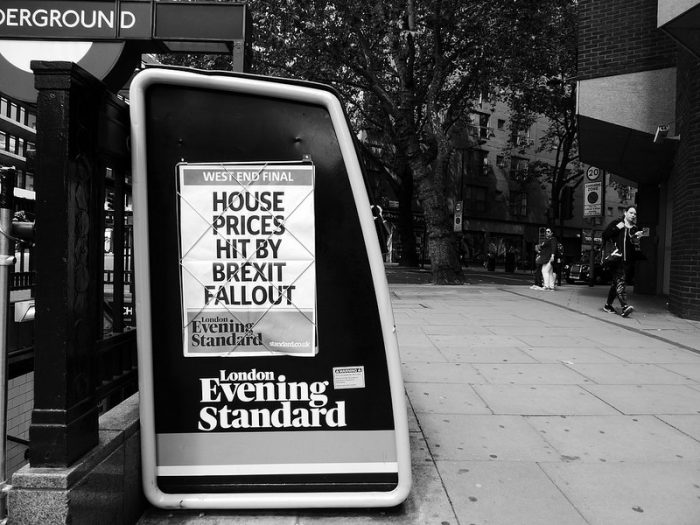 Reaction to the EU referendum result in three British national newspapers immediately after the vote was overall negative towards Brexit, according to a review of articles published in daily print titles, the Daily Mail, The Telegraph and the Guardian.  Even the Daily Mail and The Telegraph, which had enthusiastically backed the Leave campaign before the vote, had a neutral, “pragmatic” response.

Of the 489 articles about Brexit that appeared across the three papers (including Sunday editions) between 25 June and 1 July, the highest number (39%) were negative towards the UK’s vote to leave the EU, 34% of articles were neutral and 27% were positive.

The cautious coverage reflected that the vote to leave the UK was unexpected, even among pro-Brexit newspapers. It was not a time to ‘gloat’, according to one, but a time for ‘sober, realistic’ reporting. Commercial priorities also influenced editorial decisions. Newspapers admit to being reluctant to alienate readers who voted Remain, at a time when the UK was deeply divided over the result. Most of the Brexit-related articles that appeared in the UK newspapers after the referendum focussed on how Brexit would impact Britain. The Daily Mail published 50 (30%) articles arguing Brexit would be ‘good for Britain’ in the seven days of the study, The Telegraph published 52 (38%) – the Guardian published six (3%). Articles that concerned whether Brexit would be ‘good’ for Britain were coded as positive when they included language and phrases such as ’this will strengthen Britain’s economy’, ‘Britain can now choose who it trades with’; ‘no more EU migration quotas’, ‘Britain can now control its own borders’, ‘Britain regaining its sovereignty’ etc.

However, the Guardian published 113 articles (56%) arguing the opposite – that Brexit would be bad for Britain. These articles contained headline or phrases/language such as ‘the pound will weaken’, ‘investors will pull out’, ‘businesses will leave the UK’, ‘unemployment will rise’, ‘racism will increase’, ‘this will widen divisions in society’ etc. The Mail often agreed. It published 25 articles (19%) indicating that Brexit would be bad for Britain in the seven days studied; The Telegraph published 18 (10%), with 81 (46%) neutral.

Is Brexit bad or good for the EU?

On the question of Brexit’s impact on the EU: the Guardian argued that Brexit was ‘bad’ for the EU (10% of total number of Brexit articles). The Mail had no articles arguing it was bad for the EU (perhaps reflecting its mainly domestic coverage) and The Telegraph had four articles (2%). ‘Brexit is bad for EU’ articles included language such as Brexit will ’cause economic chaos in Europe’ or ‘threaten peace in Europe’, or ‘this is a victory for right-wing extremists’, ‘Brexit will increase divisions in between Europe’s rich and poor’ etc). 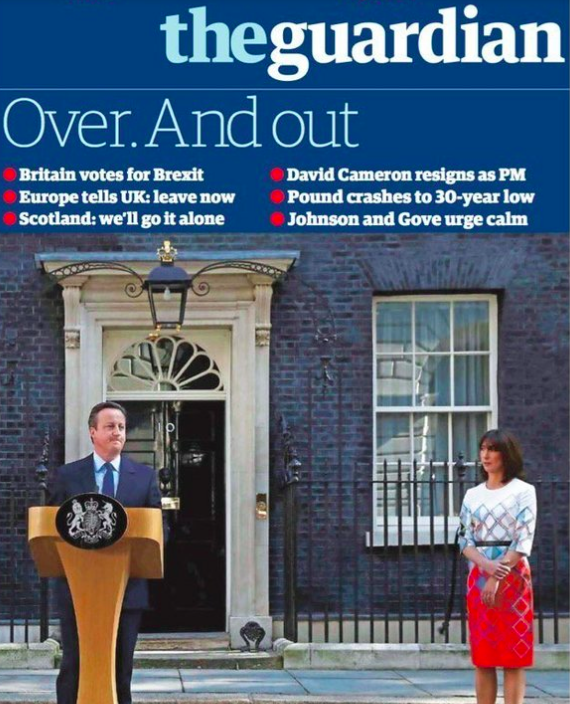 The Guardian’s coverage remained negative in the week after the vote.

Does the EU need Britain?

On the question of whether the EU as an institution would benefit from Britain’s departure The Telegraph had an equal number of articles arguing that the EU would be better off (four articles) and worse off (four articles) without Britain. In one, Peter Foster, Europe Editor, wrote on June 26: “Angela Merkel made no attempt to evade the seriousness of the situation, admitting candidly that the departure of the world’s fifth largest economy and key Nato contributor was a “blow” to the European unification process that could not be ignored.”

The Guardian had three articles arging that Britain was a key member of the EU and no articles saying the EU would be better off without Britain. The Daily Mail was slightly more convinced that the EU needs Britain to succeed, although the number of articles was low (four articles argued this, compared to three against).

Language and phrases such as ‘Britain was blocking EU integration’, ‘Britain was considered the naughty school child of Europe’ were judged as pro-Brexit, while those that argued that Britain was a key member of the EU and important to its success were judged anti-Brexit.

The Telegraph’s neutral coverage in the days after the referendum reflected an editorial decision to “proceed with caution”, according to a source at that newspaper. “It would have been wrong to start gloating and saying ‘we told you so’.  It was a momentous event and we had to treat it seriously.

“We were pro-brexit before the referendum but we were also pragmatic, we wanted to put both sides of the argument to our readers. The pragmatic attitude continued after the vote. While the newspaper believed leaving the EU was best for Britain, the result had divided the nation and we felt strongly it had to come back together. The decision had been taken and we needed to make sure the next step was right.”

The Telegraph did not want to alienate readers who voted to remain. “We had to carry the 48% of the population and the 30% of our subscribers, who were anti-Brexit, with us. So our editorial decisions were based on narrow commercial interest and a feeling that a sober, realistic approach was best for the country,” the source told the EJO.

Anti-Brexit newspapers have also had to review their editorial stance following the result. While the Guardian shows few signs of changing its views, (on August 14 its sister paper the Observer wrote about the “big, bad, lonely world beyond Brexit” where “predators of many varieties roam”), the EJO understands the Financial Times, which also supported Remain, has recently decided it needs to take a less negative, more constructive editorial approach towards Brexit. 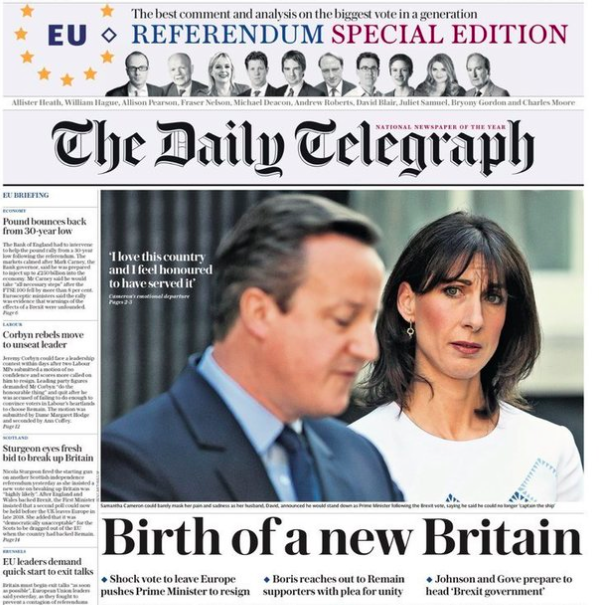 ‘Not a time for gloating’, the pro-Brexit Daily Telegraph

Immediately after the vote some newspapers started talking about compromise. Coverage was characterised by an attitude of ‘lets sort this out’. Ambrose Evans Pritchard, commented in The Telegraph: “Remainers and Liberal leavers, to use a loose term are suddenly on the same side.”

All newspapers reported post-vote divisions between pro and anti-Brexit voters. Those who voted to remain in the EU accused those who voted ‘Leave’ of being “xenophobes”, while ‘Leavers’ accused the approximately four million people who signed a petition asking for a review of the outcome of the vote of being “elitist” and “spoilt”.

This meant the public debate between the two sides often appeared personal. In her column, Sarah Vine often wrote about behind-the-scenes details of the Leave campaign, including her own views about the way the ‘Remainers’ dealt with losing the vote: “[they] are used to getting their own way and their rage is shocking,” she wrote.

Rachel Johnson, Boris’s sister and a “Remainer” described the referendum result as a “peasants revolt”. “This still feels wrong in my stomach,” Johnson wrote. “Leavers are take control freaks.”

Many of the anti-Brexit articles published after the referendum focused on the rise of racist attacks and abuse. Newspapers mostly agreed this was a negative impact of Brexit, (one Guardian headline ran: ‘A frenzy of hatred – how to understand Brexit racism’).

In the second half of the period studied, a high number of articles about the internal politics of the Conservative and Labour parties were published. These were only counted in this review if they specifically mentioned Brexit and many were judged neutral.

During and after the Brexit campaign a number of national newspapers, including the Mail and The Telegraph were  reported to the The Independent Press Standards Organisation (IPSO) accused of misleading , biased coverage.

IPSO received a particularly high number of complaints about coverage in the Daily Express, a tabloid newspaper not included in the EJO’s review. It ran a series of negative, very prominent front page stories about migrants in the weeks leading to the referendum. 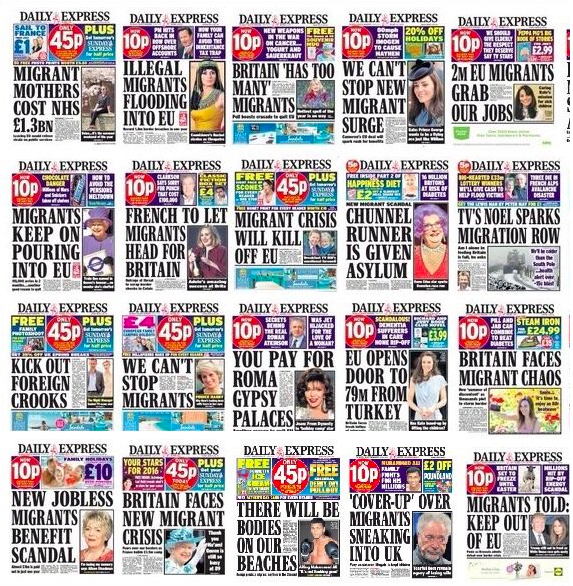 While tabloids were accused of being one-sided, many complained the BBC was too balanced.  Ivor Gabor, professor of journalism at the University of Sussex believes the BBC misjudged its Brexit coverage. In an article Bending Over Backwards, the BBC and the Brexit Campaign, Gabor echoed the view of many when he wrote: “The problem was that virtually every BBC radio and television news bulletins that I heard or watched contained a format of ‘balanced’ news that was stupefyingly predictable. A claim by the Remain or Leave campaign was automatically contradicted by a rebuttal from the other side. First, it made for tedious listening and viewing, second, it probably left much of the audience confused and third left them vulnerable to simplistic slogans.”

Does it matter what newspapers think any more? Not really, according to Stig Abell, a former managing editor of The Sun newspaper, writing in the New York Times recently. Abell, now editor of the Times Literary Supplement, argued that Britain’s decision to leave the EU could be regarded as a “final, Pyrrhic victory for British print journalism” and that the country’s “fiercely partisan, predominantly right-wing newspapers” had both fed and responded to the anti-immigration and pro-nationalist mood in Britain in the run-up to the referendum.

The widely unexpected vote to leave the EU might have caused some British newspapers, already struggling with declining circulations and revenues, to reflect more deeply on its likely impact upon the press itself.  Recent predictions that Brexit could cause a further reduction of £200m in media advertising revenue may also have had a sobering effect on post-Brexit coverage.

The study was part of Will it Kill Us, Or Make Us Stronger? – a review of opinion-forming print newspapers in 14 countries across Europe and the US.  Newspapers, chosen to represent a broad range of political views, were analysed in Albania, Czech Republic, Germany, Hungary, Italy, Latvia, Poland, Portugal, Romania, Russia, Switzerland, Ukraine, the US and the UK.

Coding for this journalistic collaborative research was based on the predominant theme that framed each article. Each was judged according to a pre-determined coding criteria as either negative (anti-Brexit), positive (pro-Brexit) or neutral. Questions were: the impact of Brexit upon the EU, whether the EU was better off with, or without Britain and also on the perceived impact of Brexit upon the UK.

Caroline Lees is the Head of Communications at the Reuters Institute for the Study of Journalism. She is the former editor of the European Journalism Observatory’s English language site. She is a British journalist and has worked for The Sunday Times, London, for seven years including time spent in Delhi as South Asia Correspondent and as a news reporter and arts correspondent. She has also worked as foreign editor and assistant editor of The Scotsman, and for the Economist and Telegraph Media Group.
» Latest stories, Media and Politics, Research » ‘Proceed With Caution’: How Three UK...