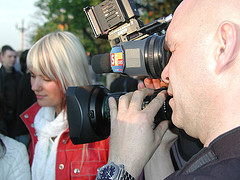 As Ukraine’s hosting duties began for the 64th World Newspaper Congress (WNC) in early September, the country’s unstable media environment became immediately apparent to the entire international community. Protests kicked off during the event’s opening ceremony when roughly a dozen Ukrainian journalists stood up and raised posters condemning media censorship in Ukraine, just as Ukrainian President Viktor Yanukovych assured foreign guests that, “Ukraine has made its way, without exaggeration, from total censorship to an open society.”

Yanukovych did not react to the silent protest of journalists, instead his security guards attempted to block their entrance and confiscate their posters. The protests were immediately tweeted by Congress participants, which eventually generated thousands of mentions online and subsequent tweets.

Eventually the protest was widely reported by all leading news outlets worldwide, including the New York Times, the Washington Post, Deutsche Welle and many others. Members of the Stop Censorship movement, an informal association of Ukrainian journalists which aims to counteract media censorship, praised the decision to choose the Congress as a venue for their peaceful protest.

Afterwards Ukrainian president Yanukovych asserted that discussions about the lack of free of speech in Ukraine reflects misleading stereotypes and a lack of objective information. Journalists and local and international media NGOs have compiled a long record of media violations from Ukraine beginning just after Yanukovych’s successful election campaign in February 2010.

The situation further deteriorated in 2011 and 2012 as censorship increased, ultimately resulting in Freedom House’s downgrade of the country from ‘free’ to ‘partly free’. IREX also reported increasing hostility towards free speech in Ukraine with their Media Sustainability Index-2011, and Reporters Without Borders ranked Ukraine 116th out of 179 countries in their newest annual Press Freedom Index.

The Ukrainian media NGO, the Institute of Mass Information, has been recording cases of media violation in Ukraine for many years. This year the organization has already noted 35 attacks/threats to journalists, and 35 cases of obstruction of professional activity and censorship.

Blatant acts of censorship have recently been attempted by Ukrainian authorities against the television channel TVi, a station known as one of a few TV broadcasters which openly criticize the Ukrainian government. The station has endured various forms of government opposition in their quest to provide independent content. The station experienced their first setback in 2010 after losing their over-the-air broadcast frequency, then again several months ago when tax police raided their offices and initiated an investigation of the channel’s president for alleged tax evasion.

Cable companies are now dropping TVi from their lineup or moving the channel to more expensive packages, with roughly 80 companies joining the unofficial boycott according to TVi’s press service. Ukrainian journalists, joined by the broader public, reacted to the TVi boycott by launching a series of protests against government pressure following the World Newspaper Congress.

While protests at the WNC have gradually lost media attention, the ruling coalition recently added fuel to the fire by endorsing a bill that criminalizes defamation. On September 18, Ukraine’s parliament – largely controlled by presidential allies – approved a bill to make defamation punishable by up to five years in jail.

The proposed bill, which must pass a second reading in the parliament and then be signed by the president, suggests very strict sanctions against anyone found guilty of “intentional dissemination of false information, which defames a person’s honor and dignity, or harms their business reputation.” Thus mild offenses will lead to a fine of up to 25,000 UAH, or about €2,500. Other sanctions suggested by the bill include community work for up to two years and a maximum five-year jail sentence in the most “severe” cases.

While Ukraine decriminalized defamation in 2001, a step largely viewed as an important development toward the country’s overall democratization, the proposed bill definitely provides the country with another setback. Attempts to criminalize libel in the run up to parliamentary elections, which are to be held in late October, have caused protests and instigated negative responses from the international community.

Dunja Mijatovich, OSCE Representative on Freedom of the Media, urged Ukrainian leadership to reject the proposed bill. “I call on all members of parliament to reject the proposed amendment, which would represent a serious setback for media freedom in the country. Criminalizing speech in a modern democracy means stifling debate and protecting public officials from criticism, and can only lead to self-censorship on the part of the media,” Mijatovic said.

Ukrainian journalists have united in their efforts to fight against the proposed bill. The Facebook group ‘Say No to the Libel Bill, It Concerns Everyone’ has already attracted over 2,500 members, with many reputable journalists and editors triggering the group’s activity. “Ukrainian journalists are confident that this law will be selectively employed against those who criticize authority. Such provisions will destroy freedom of speech in Ukraine because they will make many journalists give up any criticism of the government, as it may eventually be deemed as libel,” the group statement reads.

While the future of the bill is still uncertain, such attempts to restrict media freedom provide an expressive illustration of the general deterioration of free speech in Ukraine. As authorities increasingly demonstrate their neglect of media freedom and democratic principles, journalists must turn to the international community for support.