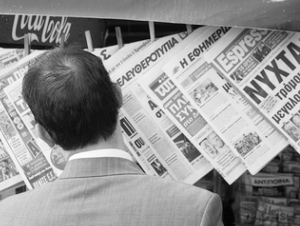 Please, beware of headlines promising to explain the Greek crisis in a nutshell.

There is no fast and simple explanation to the problem. Only the minds of those trying to sum it up in a few clichés are simple. And there are many. And it has become more toxic, I’m afraid, than the subprime bubble.

In my native Romania, mainstream media is flooded with blame-assigning, simplistic nonsense. On prime time talk shows of the main news TV channels (Antena 3, Romania TV, Realitatea or B1TV), the debate is constantly turning into a duel of hateful stereotypes.

Our neighbours, the Greeks are portrayed as lazy, insolent impostors, looking for a free dinner at Europe’s table. A nation corrupted to the core, abhorring work and taxes, hoping to eternally party on debt.

Others describe the IMF, the World Bank and the EU as loan sharks, or, even worse, as a conspiracy aiming to enslave sovereign states and to destroy democracy. Germany is accused of wanting to take control of the continent once more, this time using financial instruments to bully nations into submission.

On-line, things get even scarier. Here are just two headlines from the news platform Repoter Virtual: “The Communist monkey is asking for votes, promising more laziness”, and “Shamelessness and Impertinence won again in Greece. Greek people exposed: their last deception”.

Lucian Mandruta, a former Romanian TV anchor, writes on his blog about a “theft of national scale, perpetrated by several million EU citizens” with prime-minister Alexis Tsipras as “head of the criminal band”. He asks “why should the German worker have to support the Greek, who is sick with opinions and dependent on other people’s efforts?” One of his articles is suggestively titled “To the Gallows!”.

Radu Alexandru, another blogger, compares Greece with “the worst possible roommate”, one who doesn’t pay the rent, borrows money all the time and refuses to behave in a civilised manner. The “bad neighbour” metaphor is also used by columnist Alex Livadaru in an editorial, published by Gandul.info.

“What if Greece is the victim of an international conspiracy?” – asks the on-line magazine Money.ro, quoting Greek sources.  Actually, almost all articles suggesting a criminal plan behind the current crisis are based on foreign sources or expertise. Left-wing platform Critic Atac has published a text by Jaques Sapir, a French economist, who writes about the “Tyranny of EU institutions”, described as “fundamentally undemocratic”.  The site Cuvantul Ortodox even uses a BBC documentary (“How Goldman Sachs helped Mask the Greek Debt”) as proof of a global conspiracy. “Crises in Greece, Italy or Spain are provoked, with the sole objective of erecting the European Moloch” – concludes the anonymous writer.

On social media, this black and white, punish-the-culprit narrative is magnified to the verge of grotesque. People feel encouraged to add their own prejudices. It is no longer about assessing a problem, but about setting old scores – some of them from a distant past. In an age obsessed with political correctness, collective blaming and nation trashing are becoming fashionable again. “Greeks are the new Jews” – writes Brussels-based Romanian journalist, Dan Alexe. Others will rather believe that the “EU is the new Soviet Union”.

My native Romania is not in the euro-zone, but is probably the most euro-enthusiastic country of the Union. On the other hand, it has strong historical ties with Orthodox Greece. Every year, hundreds of thousands of Romanians spend their holidays on Greek shores, easily reachable by car. With this particular background, they should be immune to the silly rhetoric demonizing one side and demanding vengeance for the other. They are not. With nothing directly at stake, they still fall for it. If this happens in the Romanian media and on-line communities, I can only imagine the atmosphere in the Greek or German public.

And here lies a danger far graver than the economic fallout of an eventual Grexit. The biggest risk is not for the financial markets, not even for the euro-zone, but for the very core of the European foundation. It’s not about money, but about the philosophy that kept war out of Europe for so many decades. As shared prosperity – the best recipe for peace – is seriously under threat, old demons are coming back. Members of the press have a huge responsibility in these troubled times.

Miruna Munteanu is a journalist with TVR International in Romania. She was previously a political commentator for Realitatea TV. In 2009-10 Miruna was a Journalist Fellow at Reuters Institute for the Study of Journalism, University of Oxford.
» Media and Politics, Short stories » Loathing Thy Neighbour: Reporting Grexit