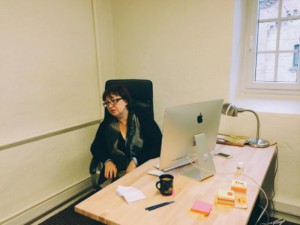 Reporting objectively on Russia is increasingly complicated, according to Galina Timchenko. Not only due to pressure from Putin’s government and pro-Kremlin groups, but also because many Russian readers expect reporters to be “freedom fighters”, rather than neutral observers.

Timchenko, a Russian journalist, should know.  Last year she was sacked from her job as editor-in-chief of Lenta.ru, a popular Moscow-based news site, after it was criticised by the government.

Soon after, Timchenko moved  to Latvia and set up Meduza.io. She hoped that by covering Russian news from a base outside the country Meduza journalists could report the news objectively, without interference.

But six months after starting the site – and two months after the launch of Meduza English – Timchenko has discovered that readers do not always want an independent voice.

Attempting to remain neutral in a region split by political extremes, Meduza has been criticised by all sides, Timchenko said. Some readers complain the site is anti-Kremlin, others that it is pro-Kremlin. Readers dispute journalists’ choice of words when reporting on Ukraine and, for merely reporting on Vladimir Putin, or his critics, the site is often accused of supporting them.

Timchenko is used to criticism, but insists it will never affect her journalistic independence. She has demonstrated this in the past. She was dismissed from Lenta by Alexander Mamut, the site’s owner and a Putin ally, after Russia’s state media regulator criticised the site for publishing “extremist material”. The regulator objected to an article that linked to an interview with a Ukrainian ultra-nationalist group.

Her sacking made Russian media history. When the rest of Lenta’s 78 staff heard their editor had been fired, they resigned en masse. It was the first and until now, last time this has happened in Russia.

Meduza’s funders are unknown. Timchenko has confirmed that Mikhail Khodorkovsky, a Switzerland-based Russian exile – a critic of Putin – was an initial passive investor, but she has refused to name other backers: “Their names will not be told to anyone. These are strictly non-public people who have nothing to do with the media or politics,” she told Forbes magazine.

Timchenko spoke to the EJO about the challenges of starting two news sites in a foreign country, counter-propaganda, professional ethics and objective reporting.

EJO: Meduza has been established in Latvia for nearly six months. Do you consider that it has been a success? If so, in what ways?

Meduza turned six months in April. Has it been a success? Yes, I would say so. First of all, we are growing ahead of schedule, hitting 2.7 million unique visitors in March, this is faster than we ever dared hope. Secondly, we’ve been meeting our financial goals, as well, moving according to our business plan. And above all we have succeeded in making a name for ourselves. Despite the censorship, there’s no lack of media in Russia, and though we had to start from scratch, we’ve managed to attract attention.

EJO: How has the English version been received? Who is it aimed at?

When we were launching Meduza English in February, we were thinking not of a publication, but more of a service. We wanted to make sure that quality news and reporting from Russia are always available to Russia-watchers, academics, and journalists. We knew that a lot of people were reading Meduza using Google Translate, and we hoped to make things easier for them. Two months on, it looks like we have succeeded. While it’s unlikely that a lot of people would want to read Russian news on a daily basis, but they will know where to go should they need it.

Meduza English has exceeded your expectations. Who is reading it and will you expand it?

Meduza English had more than 200 000 page views in March, attracting some 118 000 unique visitors. While it’s been getting some traffic from Russia, it is the users from the United States, United Kingdom and Germany who make up the bulk of the readership.

Initially Meduza English was doing translations of Meduza’s Russian output, selecting stories that, in our view, interest foreign readers and supply them with necessary context. However the English version has been contributing original material, as well, including quizzes, interviews, feature stories and live blogs.

EJO: Have there been any problems with the website in Russia? Threats to close it? Public or state criticism?

So far, no. Meduza was blocked in Kazakhstan literally upon launch, because of a report we ran about the life of the Russian minority there. In Russia, we haven’t had any threats or indications of an imminent blocking. We do know for a fact, however, that every government agency is aware of us, and they follow us. That includes Roskomnadzor (Russia’s state media regulator), the Investigative Committee, the Prosecutor General’s office, and the Interior Ministry.

EJO: Has it been difficult to maintain the website’s objectivity?

Not really. We’re a team of news professionals, and one of the ideas behind Meduza has always been to maintain the standards of our trade. I strongly oppose propaganda of any kind, be it pro-Putin or anti-Putin.

EJO: How have readers/audience responded to your claim “it’s not personal, it’s just the facts?” Do you think Russian audiences trust journalism to be objective anymore?

Of course, we have enjoyed a certain credit of trust, based on our reputation from when we worked at Lenta.ru. So in a sense, we’ve had it easier than most.

A lot of people were waiting for us to finally launch, but, it turns out, much of the audience would like to see us as freedom fighters rather than journalists. We are often criticized for not joining the “fight against the regime”.

We’re getting a lot of emails, and more often than not people will take our neutral position for support for one of the sides. For instance, our Russian readers have been known to scold us for calling the fighters in the Donetsk Republic ‘separatists’ as opposed to rebels or militia men.

Ukrainian readers, on the other hand, wish that we’d call them militants or terrorists. Radicalization has been leading to a lot of such conflicting notions. Sometimes even stating a last name in the headline – such as Navalny or Khodorkovsky – leads some readers to believe that we support them if we choose to write about them.

The same is true about Putin. If we report, in a perfectly neutral manner, on an event that mentions the President, we’re sure to attract criticism for being pro-Kremlin. That being said, people still read us.

EJO: A number of new media platforms have been set up outside Russia, specifically to ‘counter Russian propaganda’ what do you think of these?

In my opinion, to work against something is counterproductive. It is an inherently defensive approach, and it even feels redundant. The media are, by definition, anti-propaganda, provided that they stick to professional norms and ethics. Why make such a fuss of something that’s actually self-evident?

There is no fear, all journalists live in Russia and very well informed about risks and troubles.

EJO: At the start your website was more of an aggregator, now it is carrying more and more original material, what do you hope will be the future balance between the two ie aggregation versus original content?

We have said from the start that our platform is meant to be very flexible. So the minute our colleagues in Russia stop covering hard subjects, we step up, bolstering our own coverage. When we feel that others are doing a good job, we aggregate their coverage.

EJO: Do you have plans for Meduza TV?

We’ve thought about it. Unfortunately, even online a quality video or television costs too much to produce. Right now we’re not ready for such expenses.

EJO: Is the website covering its costs somehow? Or have your financial backers agreed to keep funding the site indefinitely?

I haven’t heard of a project in the media that would reach self-sufficiency in five months, it just doesn’t work like that. Like I said before, we have a business plan, and so far we’ve been meeting our financial goals.

EJO: Do you know of other Russian journalists or media platforms that have left Russia – or are maybe planning to – in order to continue to report objectively/safely?

I can’t say that I know of such endeavours. I do know of several NGOs and civil organizations that are planning to relocate, but those are not the media in a traditional sense.

Caroline Lees is the Head of Communications at the Reuters Institute for the Study of Journalism. She is the former editor of the European Journalism Observatory’s English language site. She is a British journalist and has worked for The Sunday Times, London, for seven years including time spent in Delhi as South Asia Correspondent and as a news reporter and arts correspondent. She has also worked as foreign editor and assistant editor of The Scotsman, and for the Economist and Telegraph Media Group.
» Latest stories, Media and Politics » Reporting Russia: Censorship, Propaganda And Objectivity