Are Journalists Reporting – Or Publicising – Populism? 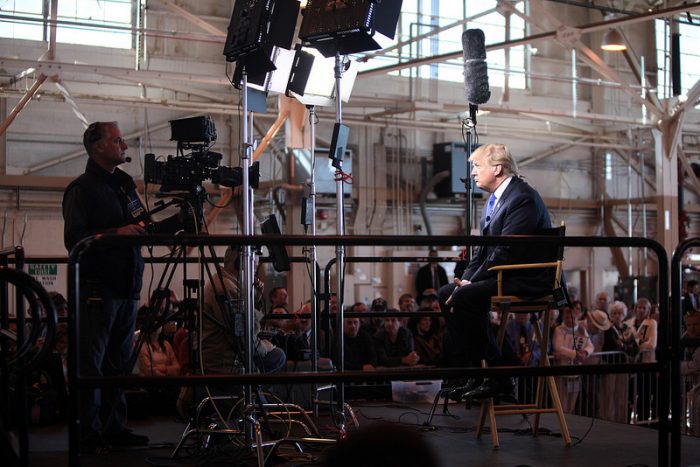 There are critical vulnerabilities in contemporary journalism practice that allow populist parties and their supporters to actively manipulate the press and subvert democratic processes. Journalists need to be aware and respond to these.

Populism is growing in strength in many democratic countries, testing the journalistic notions of objectivity, fairness and balance, and showing some journalistic practice to be deficient. If journalists and news organisations do not respond, we risk the essential freedoms that citizens of democratic society enjoy.

It is not the first time societies have wrestled with this challenge. Populism has risen and declined at various points in history, usually in periods of economic and social turmoil. Polulism is built upon individual and collective feelings of insecurity, disaffection, frustration, resentment and anger. These feelings are represented and released through the populist ideology, which can be associated with both the political left and right.

The list of populist leaders and organisations in recent years includes Silvio Berlusconi in Italy, Jean-Marie and Marine Le Pen of the Front National in France, Geert Wilders in the Netherlands, and Donald Trump in the United States. Political organisations such as Alternative für Deutschland, the Law and Justice (PiS) party in Poland, the UK Independence Party, and the Tea Party and even the Occupy movements in the US are all based on elements of populist ideology and rhetoric.

Populism is powerful because it persuades by focusing on common human fears: threats of outsiders, loss of identity, diminished autonomy and control over one’s life, loss of material comforts, and the unknown. These fears are very real and cannot be easily dismissed. Research has shown that heightened levels of uncertainty, threat, and anxiety produce both physiological and psychological changes and intensified fear reactions.  The more danger perceived and more fear produced, the more likely people are to support populist solutions.

Populism presents particular challenges to journalism and those who believe in facts and reason. The base of populist support tends to come from ill-informed or misinformed individuals who accept populist leaders at their word. They respond with high attention engagement to powerful speeches and spectacles. They tend to be hypersensitive to threats and have exaggerated fear responses. They might ignore contrary evidence, logical arguments, or expert opinions because they believe those are parts of elite manipulation and conspiracies, or that only they perceive the truth. 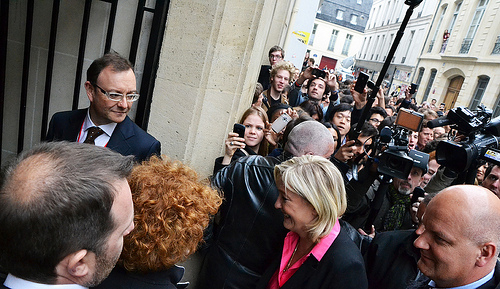 Contemporary populism is characterised by its focus on a number of common elements: discontent with government effectiveness, anger at economic and employment conditions, fear and resentment of immigration, and readiness to embrace simplistic explanations and solutions. Representative democracy is perceived as being controlled by corrupt elites that need to be removed. The division of power among independent legislative, executive, and judicial branches is seen as undesirable, reducing governmental effectiveness, and hindering the populist agenda. Populists believe that governments can easily and rapidly alter economic and social conditions. Their world view typically contains elements of virulent nationalism and isolationism.

In promoting their views, populist leaders almost universally rely on hyperbole, misstatements, and demagoguery. They exhibit narcissistic traits and disdain for other people. Their rhetorical tools and practices do not produce negative reaction among their supporters, however, but rather increases their support and recruits new followers. They also make great headlines and stories for journalists and news media.


It is through that news selection and practices that populism exploits the vulnerabilities of journalism. By publicising populists’ outlandish statements and stunts, by treating them fairly, and by accurately reporting their speeches and activities, journalists open themselves to exploitation in ways that distort and conceal truth. Malicious ideas that are antithetical to democracy, human dignity, and knowledge are regularly spread without direct correction or criticism, and thus the foundational values on which the practices of journalism were established are endangered.

Part of the problem is that journalists’ selection of what to cover and whose stories to tell is biased by emphasis on the novel, the unusual, the unexpected, and the deviant. Populist rallies and speeches typically involve all those factors, thus getting the attention and emphasis of journalists and news organizations. That alone assists populists, but there are also significant failures in news coverage itself. 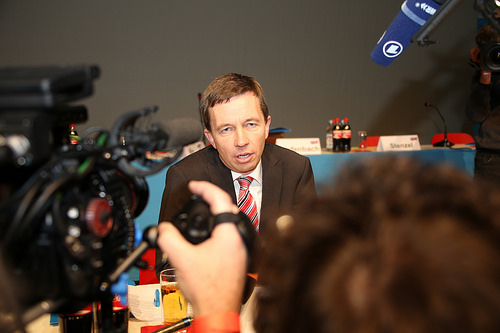 Bernd Lucke, a founding member of the populist Alternative for Germany party, talks to the press.

1. Accurate reporting is not always representative

The failures are not about accurate reporting, because most media accurately report populist speeches, pronouncements, and rhetoric. Nevertheless, there are significant failures involving accuracy, verification, balance, fairness, and permitting manipulation to occur.

The failure in accuracy occurs when journalists accurately report what is said, but the story does not present an accurate picture of the world to readers, viewers, or listeners. When stories are filled with assertions based on falsehoods and misinformation and they are not called into question by the journalist or contain rebuttals by other parties, some of the public will accept the assertions as truthful and based on established information. Quality journalism identifies dubious assertions to avoid misleading the public.

The second failure involves reporting without adequate fact checking and contextualisation. Journalists have a duty to their readers and to democratic society to ensure that the information in each article is as truthful as possible. This means journalists must do more than merely report on what candidates say, providing information that confirms or contradicts statements made or showing where statements are based on misinformation or misconstrued facts. Journalists need to examine claims, seek out the facts, and expose falsehood.

3. Balanced reporting can distort the truth

The third failure in reporting on populist leaders and movements results because journalists do not often respond to the significant challenges to the ideal of balanced reporting that it creates. The idea of balance—that there two sides of the story that must be told—often distorts the truth.  This idea of two sides is erroneous on its face, because there are usually multiple sides of a story. The real failure, however, results when an equal “balanced” presentation gives readers the impression that each perspective should be given equal weight and is based on similar veracity.

This problem of false equivalency becomes a significant challenge in covering populists and others, because there are some ideas that simply should be ignored, repudiated, or denounced. Not all ideas are of equal value and should not be presented that way.

Journalists must play a role in helping readers distinguish between reasonable and unreasonable ideas. This equivalency and balance problem becomes particularly problematic when covering statements and ideas that are based on misinformation, misrepresentation, and falsehoods. How can truth be balanced with a lie? When journalists remain unreasonably neutral, they help spread falsehoods and lies and promote the causes of hatred and racism.

4. Journalists must be fair to audiences too

A fourth failure involves the issue of fairness. Journalists have an obligation to be fair to those they are reporting about, but also to those they are reporting for. The duty to report fairly does not mean permitting misrepresentations, exaggerations, falsehoods, and lies to be disseminated without rejoinder. And when there is a conflict between duty to be fair to those being reported upon and the public, the duty to readers, viewers, and listeners should prevail.

The fifth failure has been to ignore or not react to manipulation. Many populists have learned to control journalistic practices to their benefit. Journalists must take special care when rallies and speeches and populist responses to public events and developments—terrorist attacks, fear of foreigners, floundering Middle East policy, and stagnant economies—are clearly being used to gain media attention or twist the coverage. Efforts should be made to ensure that reporting is not unduly responsive to deliberately provocative language and assertions. Failure to exercise care about manipulation makes journalists complicit in the effects of populism.

How to cover populism without becoming its mouthpiece

There is little journalists can do directly to overcome the fear and lack of knowledge of populist supporters because most are not regular readers and viewers of quality news providers. We need to ensure, however, that those who do use our newspapers and broadcasts understand populism and its threats.  We need to ensure we are identifying and covering its appearance, addressing it early, and then continuing to critically and carefully cover it without becoming its mouthpiece to recruit new supporters.

We need to be more aware of the types of coverage we are providing, whether our practices are skewing our coverage or allowing us to be manipulated, and the unintended effects of our coverage. Journalistic practices are not sacrosanct, but are in place to help us better serve the public and democratic society.  Unthinking and uncritical adherence to the practices can become dangers to those objectives. We need to continually be asking whether we are merely showing loyalty to our practices or loyalty to our audiences and to democracy.

Populism continues to remain a danger to representative democracy. It is our responsibility as citizens and journalists to ensure an effective response to it and that the coverage we provide gives the public the information they need to astutely evaluate its elements, deficiencies, and threats. The future of democracy depends upon it.

Excerpts from the Keynote speech, “Journalism, Populism and the Future of Democracy”, by Robert G. Picard, Reuters Institute, University of Oxford, to the 40th Anniversary Symposium of the Institut für Journalistik, Technische Universität Dortmund, October 28, 2016.

Professor Robert G Picard is a specialist on media economics and government media policies. He was formerly based in the Media Management and Transformation Center at Jönköping International Business School in Sweden where he was Director of the Center and Hamrin Professor of Media Economics.He is the author and editor of 28 books, and has been editor of the Journal of Media Business Studies and the Journal of Media Economics.Robert is the Reuters Institute North American Representative and directs projects across the main RISJ research areas examining changes in the business of journalism, the practice of journalism and journalism and accountability.
» Ethics and Quality, Latest stories, Media and Politics » Are Journalists Reporting – Or Publicising...