Newsgame: When the News Becomes a Videogame

Newsgames and editorial games are interactive videogames that tell the news through interactive graphics that a reader manipulates to create different scenarios.

The games are perfect for newspapers. They engage readers, create a sense of community, encourage the sharing of content and can, for example, increase the time users spend on the site of an online daily newspaper, in the same way other multimedia news formats do.

The media used them at first as a “one shot” for stories of global interest. They are now becoming more popular but at present are still only a tiny part of the information ecosystem. Companies such as Game the News are fast building a reputation as the go-to people for news-based interactive games.

The main obstacles to the growth of newsgames are the development costs and times: it makes more time and money to design a game than to create a simple graphic. Some research projects are looking for solutions to these problems, focusing mainly on how to generate graphics efficiently. A recent article published in ProPublica suggests that the technology needed for newsgames is not in fact that complicated.

One example, HeartSaver was developed by a team from ProPublica in just two days during the Editors’ Lab Hackathon held in April this year and deals with the question of the health structures in New York City. In the videogame the players are displayed in a map of the Big Apple and have to take as many patients as they can, suffering a heart attack, to an emergency room. Indeed, the hospitals have different survival rates for this specific health problem and the time spent transporting the patient to the emergency room can also affect his/her chance of survival.

As the authors of the newsgame explain, some outer boroughs of New York do not have emergency rooms and the game recreates the difficulties citizens may face trying to find a good hospital to take the sick and injured to: the complexity of the game increases in these cases because the structures appear further away. Even if a reader plays the game for 15 seconds, the game conveys a powerful message and illustrates key points about the healthcare debate. 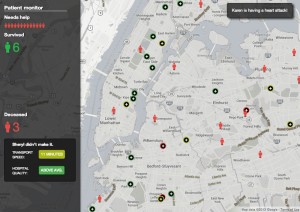 Newspapers may still have in built resistances to using news games: they are worried that games are inherently trivial and not an appropriate way to impart serious information. But readers appear open to absorbing information from several sources, and there is no reason a carefully thought out, well presented game could not be one of them.

In many cases, people are in fact more willing to pay for games than to read traditional digital information content. Newsgames could be the perfect way for the information industry to monetize part of its content, increase the time a reader spends on a site, and strengthen their loyalty. The media should make sure they harness the power of this new medium.

Photo credits: a still  from Vote!!! The Game, the videogame commissioned by the US government on the occasion of the presidential elections in November 2012. In the text, a still from HeartSaver.

Pier Luca Santoro is a journalist and marketing, communication and sales intelligence expert. Since 1998, he has been working as consultant in the field of strategic positioning, organization, communication and formation for public and private companies. He's a regular contributor to the Italian EJO. Pier Luca Santoro is also a media blogger. His blog is: http://giornalaio.wordpress.com/
» Digital News, Media Economics » Newsgame: When the News Becomes a...