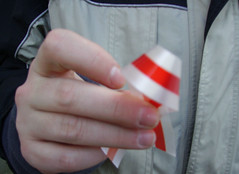 How the news in Belarus remains…upbeat.

A few weeks ago Sovetskaya Belarussia – the most widely circulated daily in Belarus – ran a lead story proclaiming the country’s GDP had risen a glorious 9.8 percent since January and that exports hit record levels of $20 billion over the past seven months. To be quite gentle, this is a generous report. The paper’s next story goes on to detail the remodeling of ATM machines in Belarus to better suit the needs of its handicapped citizens who, apparently, find the burden of withdrawing cash exceedingly irritating. Not because the national currency has crashed, of course, but rather because it’s just so terribly inconvenient to fumble around with an ill-placed keypad.

Journalist Tom Balmforth, who describes Belarus as a “population hungry for reliable information amid the sea of state-sponsored propaganda,” uses Sovetskaya Belarussia’s reporting to illustrate the widening gap between information presented by state-run media outlets and the information needs of a country deep in economic crisis. He believes Belarus’s bountifully subsidized state media has increasingly distanced itself from the authentic realities of everyday Belarusian life.

The offense of dramatically divergent “official” news narratives is, of course, commonplace and hardly limited to Eastern nations (WMDs, anyone?). However, in consulting the 2010 Press Freedom Index, journalism’s vulnerability in Belarus does seem to adopt a particular urgency, as it surpasses only 24 countries (out of 178 total) in ranking. Belarus is more or less the Waterworld of press freedom.  Not the worst, per se, but still pretty awful. As testament, authoritarian President Alyaksandr Lukashenka received the prestigious title of prédateur, awarded by Reporters Without Borders to an elite handful of repressive scoundrels. Lukashenka landed the honor after his controversial “reelection” on December 19, 2010, wherein throngs of journalists covering the event were arrested and beaten by police. Physical violence is surely a mark of severity, however it doesn’t end there. This past July a number of popular Russian songs featuring “dissident undertones” were banned from airwaves amid protests against Lukashenka’s regime.

According to Reporters Without Borders, “The state monopoly of all printing and distribution networks [in Belarus] allows for instant crackdown on journalists who try to rock the boat. Selective granting of accreditation forces many foreign media outlets and their local correspondents to work illegally, making them even more vulnerable. More than ever, the only option is to go underground, returning to Soviet-era ‘samizdats’ (forbidden material copied and distributed clandestinely).”

Belarus’s state media may coat a gloss of sunshine over what otherwise appears to be a rather grim forecast, but are Belarusians falling for it?

As far as Balmforth is concerned, the answer seems to be no. In a recent article published by Radio Free Europe, he discusses how a suspiciously cheery state media seems to have forced the population toward alternative sources of information.  “As the crisis continues to deepen,” writes Balmforth, “this has led to a rise in demand for the low-circulation newspapers and news websites produced by the country’s feisty, yet beleaguered, independent and opposition press.”

Kate Nacy is the first EJO Fellow to participate the European Journalism Fellowship program at the Freie Universität Berlin. Kate Nacy works as a journalist, writer and editor. Her work has appeared in news publications as well as in literary and arts journals. She served as the European Journalism Observatory’s English Web Editor from 2008 – 2012.
» Ethics and Quality, Press Freedom » Outlook (Usually) Good in State-Run Media