Media as an Extension of Politics 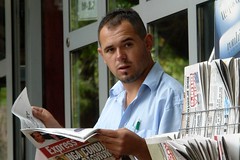 Throughout the post-communist transition period, the relationship between media and politics has been intensely complex and rife with contradiction.

Today’s Balkan press functions more as an extension of politics than a representation of public opinion, and a sizeable portion of the media continues to be controlled by powerful political groups. Observations shared by a number of authors (such as Karol Jakubovicz, Mihai Coman, Colin Sparks and Tomasz Goban-Klas) characterizing the media situation in post-communist societies also apply to the Balkan region: The press became pluralistic, but not independent. Free, but still not independent.

The shift from the “Soviet Media Model” to the “Social Responsibility Model” seems to have been more difficult than anticipated. Habits inherited from the time of communism have politicians and political parties constantly trying to influence the media, as the conviction remains strong that whoever controls the information holds the power. The political classes, which as a rule are obsessed with maintaining power, “consider the media to be not a major, but the main instrument for politics” (Goban-Klas, 1997). Goban-Klas also explain that, “This vision of the media is one-dimensional, over-politicized and simplified, believing in a missionary role for the journalists and an ideological press”.

If asked to provide two key words to describe the fundamental problems faced by the media in the Balkans today, these words would undoubtedly be “re-politicization” and “clientelism.” In fact, these terms could be seen as two sides of the same coin.

It is an inescapable fact that a conflict-ridden and highly politicized society (which is still the case with societies in the Balkans) infects the media.  Politicized societies also use media outlets as an important tool in waging conflicts – destroying their independence, impartiality and professionalism in the process. For some, it is even difficult to imagine a media system completely devoid of partisanship.

The most common examples of political clientelism are found in public broadcasting, which in Albania appear from FYR Macedonia, Kosovo and Montenegro. These broadcasters continue to be under the control of the central governments, which use and abuse them during and beyond electoral campaigns. Although it would be far-fetched to compare today’s public broadcasters to the bastions of propaganda they were during the period of new authoritarianism, in most cases the so-called public television channels still remain “red carpet” stations, as they feature full of coverage of government protocol and information. These public channels resemble something more akin to “Ministries of Propaganda.”

Clientelism in the media is a complex phenomenon closely connected to the context of social and political development in the region. Politics in the Balkans are transformed into tele-politics. Generally speaking, political and public debates have moved from the mouths of protestors to the scenes of television debates, which is certainly a positive development. Yet it seems the media has paid a price for this change.

Albanian analyst Fatos Lubonja uses the term “media regime” to describe the situation. According to Lubonja, “if in the so-called police or military regimes, the army or the secret service are used to ensure the regime holds on to power, in our case the media is used.” Perhaps the most appropriate term in this case is “media-ocracy.” While in theory, issues pertaining to the media are presented as issues of democracy, in reality they become a matter of power. As Sandra B. Hrvatin and Brankica Petkovic write, “today it seems impossible to remain in power without the support of the media.”

There exists another tendency, which, at first glance, seems to reflect a certain unrestrained independence. In some cases journalists can write and criticize as much as they like, however there is no reaction, no outcry, no notable change. This phenomenon has been observed in Albania, where the erstwhile nervous reaction to criticism is now replaced by a total indifference. Several important investigative stories have been published in Tirana’s newspapers over the last few years, but both the authorities and the judicial system failed to react or initiate the inquiries these stories demand. Journalists may have the right to speak, but perhaps the “right” people fail to listen. And sadly, indifference to criticism leads to the devaluation of the free word.

» Ethics and Quality, Public Relations » Media as an Extension of Politics