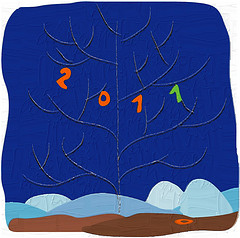 As the familiar lists of wrap-ups and predictions spring from every conceivable angle, the future of the news media is, once again, condensed in 10 convenient points.

Deeming 2010 the year of “mobile for news media,” Vadim Lavrusik of Mashable points to the gusto news organizations exhibited with their incorporation of social media in news operations. Thus, 2011 might well commence with fresh attitudes toward the open social Web. “The focus will shift from searchable news to social and share-able news, as social media referrals close the gap on search traffic for more news organizations,” says Lavrusik. “In the coming year, news media’s focus will be affected by the personalization of news consumption and social media’s influence on journalism.”

The first prediction deals with perhaps the year’s most colossal “journalism” story – the Wikileaks saga. Anticipating a rise in “leakification” journalism, Lavrusik expects to see clusters of new media entities surfacing to model themselves as whistleblowers, paving the way for a new competitive market. Additionally, we’ll see media startups take on a tablet-only and mobile-first approach, media mergers and acquisitions rolling forward at a steady pace, the formal death of the foreign correspondent position, and the rise of interactive television.

Kate Nacy is the first EJO Fellow to participate the European Journalism Fellowship program at the Freie Universität Berlin. Kate Nacy works as a journalist, writer and editor. Her work has appeared in news publications as well as in literary and arts journals. She served as the European Journalism Observatory’s English Web Editor from 2008 – 2012.
» Digital News, Ethics and Quality » Let the Foretelling Begin