The Journalist as Entrepreneur 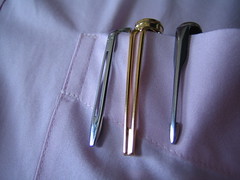 Discourse on journalism in the U.S. is rife with new coinage to describe its state and prescribe its future.

The latest addition to the dialogue is entrepreneurial journalism – the idea that journalists must channel innovation in order to reinvent their trade and confront the economic realities of their profession. Supporters can be identified in foundations like the John S. and James L. Knight Foundation as well as renowned “gurus” of online journalism like Dan Gillmor, Jeff Jarvis and Jay Rosen. Yet despite being largely encouraged, those reluctant to applaud efforts in entrepreneurial journalism see it as camouflage, a euphonic circumscription for ongoing self-exploitation.

American educational institutions have acknowledged that theirs is an important role to play in mending the news crisis. As publishing is now possible all the time, practically by anyone, anywhere, it’s important for journalism educators to understand which environments will foster the best reporting, the kind of reporting which unfortunately tends to be stressful, time-intensive, and costly.  The task is far from small, as we’re faced with the curse of the digital age: more information than ever before, and fewer minding the gate.

The same communications revolution that made – according to protagonists of citizen journalism – everyone a potential journalist has simultaneously crippled America’s ad-dependent strategy of paying for professional journalism.

There are exceptional new benefits to the digital revolution, particularly the fact that journalists are no longer forced to rely expressly on big media for support, but it goes without saying that fundamental investigative journalistic skills and values remain as important as ever. The last decade has seen media and technology erupt in a flurry of development, bringing forth a new breed of digital mavericks.

For many years, however, journalism schools were still seen as mold-collectors, run by fossilized faculties out of touch with the digital age. Today, many news leaders believe journalism education is improving, with better quality leadership developing digitally savvy, knowledgeable graduates.

To their credit, American educators have taken strides to harvest entrepreneurialism in hopes of nourishing a withered news model, tapping into collaborative tools and models geared toward problem solving in the media industry. Dramatic innovations in media surfaced due in part to a range of new opportunities and incentives devised by educational institutions. Many J-schools broadened their journalistic programs, allowing students to engage in inventive, real-world digital newsgathering.

A selection of programs and institutional incentives stand out for their agenda-setting function, with prominent innovation efforts helping to uncover new responses to problems of news.  The following dossier provides a short overview of such endeavors.

Two mid-career programs with legendary reputations – Harvard’s Nieman Foundation and the John F. Knight Fellowships at Stanford – remain highly ranked among the driving forces reinventing journalism. The Nieman Fellowship program is the oldest, most reputable study program for journalists in the world,

providing professional and intellectual enrichment to more than 1,300 journalists since 1938. The program itself has essentially remained unchanged, but several new initiatives created by the Nieman Foundation stand out. Among the heap of inventive contributions is the now-famous Nieman Journalism Lab, a virtuoso website reporting on the future of news by identifying emerging business models, innovation and best practices in the digital age. The Nieman Lab is also responsible for Fuego, an online tool monitoring Twitter for journalism-related topics and Encyclo, a Web encyclopedia of organizations, institutes and topics impacting news. Additionally, there’s Nieman Reports, the more traditional quarterly magazine (and website) focused on challenges and opportunities in journalism, and Nieman Watchdog, a website designed to keep journalists informed about different ways to monitor powerful public figures, and how to hold such figures accountable. Not least is Nieman Storyboard, which showcases excellence in narrative journalism and explores the future of nonfiction storytelling.

Stanford’s Knight Fellowships recently tweaked its focus in order to zero in on journalistic innovation and leadership. For James Bettinger, Director of Knight Fellowships, a particular source of pride can be found in 18 Days in Egypt, which he describes as “a crowd-sourced documentary/reporting tool.”  Developed by 2010-11 Knight Fellows Jigar Mehta and Hugo Soskin, the project was designed to capture the outpouring of photos, videos, emails and tweets shared by Egyptians during the 2011 uprising. The tool, Bettinger explains, “uses geotagged, time-stamped mobile phone video and photos to create an interactive report of events.” More such creative, hands-on journalistic products may serve as a welcome respite from traditional “thinking” sabbaticals.

With its dedication to praise for bold ideas, Stanford’s other laudable brainchild, the Knight News Challenge, marked a shift in dialogue about the changing shape of journalism. The KNC – the Knight Foundation’s international media innovation contest – surfaced in 2006 with the aim of accelerating innovation in news and information by funding and supporting the “best breakthrough ideas.” After five years and $27 million in award money, Knight upgraded its first version and developed the Knight News Challenge 2.0, emphasizing speed and agility  (offering three themed contests per year rather than one, with a faster turnaround on entries) and a new topical focus. The current “networks” challenge round seeks projects that use the best of existing software and platforms to find new ways to convey news and information.

Past KNC winners devised news tools such as DocumentCloud, a document-reader which gives users access to extensive information about the people, places and organizations mentioned, Ushahidi  a crowdsourcing tool, and NextDrop, which tells residents of a city in India via text when water is available.

Established in 2011 with a $4.2 million grant, the Knight News Innovation Laboratory was formed as a joint initiative of the Medill School of Journalism and the McCormick School of Engineering and Applied Science at Northwestern. The root of the collaboration is a fusion of journalism and computer science, with an ultimate goal of bolstering the digital infrastructure which could journalism into its next phase.

The Knight Lab joins the cluster of techy-journalist programs mushrooming across the States, among them NYU’s Studio 20, Columbia’s joint Journalism/Computer Science M.S. and Medill’s journalist/developer scholarship. The Knight Lab’s unique element can be found in its synergies with Chicago-area news outlets, including The Tribune Company, Chicago Public Media, The Daily Herald, the Chicago Community News Trust, and the Chicago News Cooperative — with the goal of improving the information available to the communities those outlets serve.

In 2011, CUNY Graduate School of Journalism received $6 million in grant money to create the Tow-Knight Center for Entrepreneurial Journalism and the first Master of Arts program in Entrepreneurial Journalism. The Center boasts a three-pronged plan to develop a sustainable future for quality journalism by educating students and mid-career professionals in innovation and business management, facilitating research in relevant topics, and developing new journalistic enterprises. CUNY’s new Entrepreneurial Masters program will include course offerings such as New Business Models for News, Technology Immersion, New Media Apprenticeship, New Business Incubation, and Fundamentals of Business, in addition to featuring an Entrepreneurial Boot Camp and a Visual Storytelling Boot Camp.

In a large-scale collaborative effort, Columbia Journalism School and Stanford’s School of Engineering partnered to create the Institute for Media Innovation, scheduled for completion in June of 2014. The Institute hopes to bridge the gap between journalism and technology and encourage synergies between the two disciplines. Rather than functioning as a traditional school or educational facility, the Institute’s emphasis will be on creating products and projects, similar to that of a media-oriented venture capitalism firm.  Advisors at the Institute, much like the students and faculty, will arrive toting a mix of journalism, technology and business backgrounds.

As educational institutions in the U.S. increasingly concentrate on journalistic innovation, the question of what’s evolving in Europe remains more difficult to summarize. In a follow-up piece, the EJO will weigh in on the status of entrepreneurial developments in media and journalism in our partner countries.

» Digital News » The Journalist as Entrepreneur