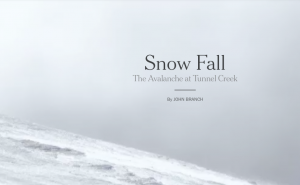 A news story about a snow storm in Washington State won The New York Times 2013 Pulitzer Prize, and led to an avalanche of so-called literary reportage.  Snow Fall was hailed as an innovative style of journalism, combining as it did multimedia elements with compelling writing.  Many similar works were published online by major newspapers and news websites.  But is this kind of reporting really new, or are there similarities to old-style literary journalism? And where does it leave journalistic neutrality?

Using literary techniques to attract audiences and create emotional involvement in news is not new.  Such an approach has been used multiple times in the history of journalism, by various means but for the same purpose. 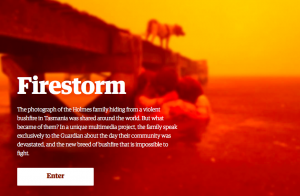 Firestorm: published in the Guardian 2013

In the 18th century literary devices were used by journalists to create engaging narratives. Scenic reconstruction, character development and evocative description were common elements in the description of different subjects, from war to everyday life.  Another wave of literary journalism characterised magazines and books in the 1930s and ’40s, and then appeared again in the ’60s with the works of Joan Didion, Gay Talese and Hunter S. Thompson among others. More recent examples include Blackhawk Down, published in the Philadephia Inquirer 2007 and Firestorm, published in The Guardian in 2013.

What sets literary journalism apart is the strong presence of the author’s voice in the narration, together with a writing style typical of fiction rather than news presentation.  Literary journalism, investigative stories and immersion journalism are also characterised by a certain length and depth.  Thanks to the development of digital technology, classic literary techniques can now be combined with elements from other media: videos, audio, animations, maps, interactive infographics and data visualisation.

The technique enables a more immersive form  of story-telling, taking the reader along in a linear way, as with a movie or novel.  It could not be more different from the general consumption of online content which is characterised by fragmentation of information and hypertexts.

To try to ascertain whether such reportage was innovative, a research study was set up by a team of journalism professors from Kent State University, Ohio, in the US. The Digital Animation of Literary Journalism analysed 50 examples of multimedia packages.  These were all published between 2013 and 2014 and came from four countries: the United States, United Kingdom, Australia and Canada. 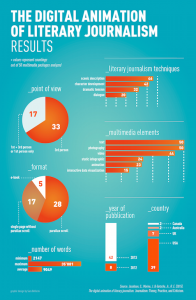 Four main aspects were identified as core elements of literary journalism:  first, the narration of an event creating a scene-by-scene construction through actions, details and emphasis on emotional weight; second, the presence of dialogues written in the story’s real time; third, the presentation of news sources as characters in the story;  and fourth, the creation of dramatic tension to engage the reader.   The researchers took into account digital components, the narration point of view and the story format. They also distinguished three main formats: the horizontal scroll, the single page view, and the parallax scroll – where some elements stay on the page longer than others when scrolling.

Their results clearly show that most of the multimedia packages studied did adopt the scene-by-scene construction as a core element.  Character development was the second most used device, being present in 84% of the narrations, followed by dramatic tension and dialogue.  Almost all the examples used a combination of at least three of these devices.  Two thirds of the analysed pieces adopted a third-person point of view, while the remaining articles based their narrations on either mixed first/third-person or first-person only. Pictures and text were present in all the narrations, and the majority also used video. Lastly, the authors found no net preference for the format, although the majority used the parallax scroll.

The study concluded that the adoption of these modern devices did represent a new wave of literary journalism.  Also, the integration of different multimedia elements and techniques has its own literary advantage and purpose.  The digital components are not simply added to the text, but rather they interact with each other, adding to the overall meaning. In this sense, the research should also be considered as a contribution to the current debate on the need for newsrooms to combine technological skills with traditional journalistic competences.

Two further points emerge: the reaction of final ‘users’ and the risks of this form of literary journalism.   It is reasonable to speculate that user experiences may vary significantly across different age groups, and cultural and socio-economic backgrounds.  It would, the authors think, be of great interest to investigate the actual reception of these literary narrations.

Another relevant consideration is whether neutrality is compromised.  On one hand, these techniques can simplify the understanding of complex pieces of information for a broad audience. A literary style, however, increases the risk of losing impartiality while reporting facts.  If these premises are true, there is an evident need to accurately and carefully choose which stories to narrate with such techniques.

The Digital Animation of Literary Journalism