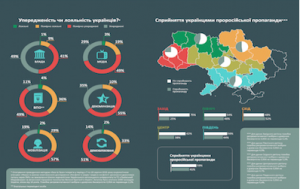 Media in Ukraine has become a pawn in the game between different political forces, a new study concludes.  And audiences have noticed: recent months have witnessed a sharp decline of public trust in the media. This crisis is only likely to deepen as the country remains marred by conflict, post-Maidan political turmoil and information warfare.

The study, by Lviv Media Forum, the Ukrainian Catholic University and media NGO, “Conflict in Media and Media in Conflict: Communication of Sensitive Issues through the Mass Media”, examined the role of Ukraine’s media in social conflicts – and the public’s perception of their performance.

The work was based on a mixed-method research design that included focus-group discussions, a nationwide survey and interviews with experts in the media, sociology, political science, anthropology, and other areas.

The report offers some damning conclusions on the Ukrainian media. News outlets have become the instruments of politicians, who use them freely in their political games, according to the researchers. Generally, they fail to perform their most important function – informing society. The media are financially dependant upon their owners and thus provide a lot of biased information.

As a result, they are experiencing a severe credibility crisis. The survey reveals most Ukrainians think their country’s TV channels are biased. About 76 per cent of respondents believe media owners broadcast content that conveys the interests of the owners.

Despite the lack of credibility, television remains the most popular source of news in Ukraine. Nearly 90 percent of respondents reported watching TV news programmes. At the same time, social media is becoming a significant information provider for Ukrainians: over 30 per cent of respondents said they use it as their daily news source.

Media experts interviewed as part of the research also present a bleak picture. They warn that unprofessional Ukrainian journalists, as well as distorted coverage of certain topics, may lead to social conflicts. They also note that the Ukrainian media fail to objectively report social and political life for their audience.

According to the study, many Ukrainians believe they lack information about political reforms, new energy tariffs, the military draft, and other important political and social developments. Instead, they claim the media devote most of their time to reporting the armed conflict in Eastern Ukraine.

There is little hope that Ukraine be able to overcome this media crisis – at least for the near future. As conflict and political turmoil continue, TV channels, newspapers and other media remain a far too important asset to the different political groups that are currently tearing the country apart. Only the return of stability could provide a lasting solution.

Source: this article was first published on Ukraine EJO

Halyna Budivska is a PhD student at the Mohyla School of Journalism, National University of Kyiv-Mohyla Academy. She is also the editor of the Ukrainian website of the EJO.
» Media and Politics, Recent » Research: Ukraine’s Media ‘A Mistrusted, Biased...