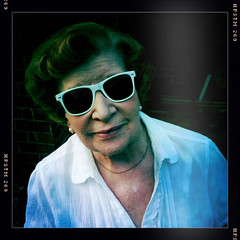 She bakes a mean gingerbread and started a fibromyalgia support group on Facebook: She is Granny 2.0.  Seniors are typically paper-readers and six o’clock news-watchers. They’re large consumers of media. Now, however, they’re ambling into the fun-filled world of virtual friending, poking and farming. They’re ripping it up on social networking sites. Grandkids of the world, take heed.

The Pew Internet and American Life Project recently found that individuals 74 and older represent the most rapidly growing demographic in social networking. Sixteen percent of Internet users in that age group now visit social networking sites, up from a mere four percent in 2008.

According to Poynter, the Facebook page of the American Association of Retired Persons (AARP) acquired more than 20,000 followers, prompting the organization to redesign its own website with a members-only networking function (Panda Buffet, anyone?).

Aside from an increasing interest in Facebook and similar sites, the Pew study additionally found that more than half of Internet users 74 and up are accessing news online. The Internet’s not such a daunting place after all.

Kate Nacy is the first EJO Fellow to participate the European Journalism Fellowship program at the Freie Universität Berlin. Kate Nacy works as a journalist, writer and editor. Her work has appeared in news publications as well as in literary and arts journals. She served as the European Journalism Observatory’s English Web Editor from 2008 – 2012.
» Digital News » Granny 2.0