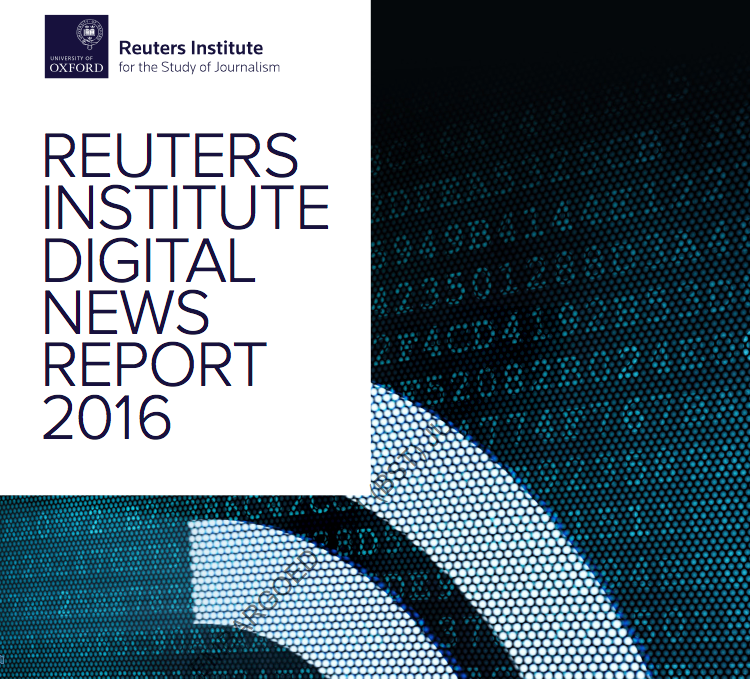 The 2016 Digital News Report, launched today by the Reuters Institute for the Study of Journalism, is the biggest ever and remains the most authoritative study of its kind. It is based on a survey of 50,000 online news consumers across 26 countries.

The report finds that publishers across the world are facing unprecedented levels of disruption to business models and formats from a combination of the rise of social platforms, the move to mobile and growing consumer rejection of online advertising.

1. Social Media are a key source of news: Half (51%) of those surveyed say they use social media as a source of news each week. Around one in ten (12%) say it is their main source. Facebook is by far the most important network for finding, reading/watching, and sharing news.

2. Social media are significantly more important for women (who are also less likely to go directly to a news website or app) and for the young. More than a quarter of 18–24s say social media (28%) are their main source of news – more than television (24%) for the first time.

3. Originating news brand often not noticed: The growth of news accessed and increasingly consumed via social networks, portals and mobile apps means that the originating news brand gets clearly noticed less than half the time in the UK, and Canada. In countries like Japan and South Korea, where aggregated and distributed news is already more widespread, the brand only gets noticed around a quarter of the time when accessed through news portals.

4. Television news still most important for older groups but overall usage has continued to decline, particularly for ‘appointment to view’ bulletins and amongst younger groups.

5. Smartphone usage for news is sharply up, reaching half of our global sample (53%), while computer use is falling and tablet growth is flattening out.

6. Most consumers still reluctant to pay for general news online, particularly in the highly competitive English-speaking world (9% average), but in some smaller countries, protected by language, people are twice as likely to pay.

7. Business problems for publishers worsened with the rise of ad-blocking, which is running at between 10% (Japan) and 38% (Poland) but much higher amongst under-35s and people who use news the most. The vast majority of those who have ever downloaded a blocker are using them regularly, suggesting that once downloaded people rarely go back.

8. Ad-blocker use is increasing on smartphones: Only around 8% of smartphone users currently use an ad-blocker but around a third of respondents say they plan to install one on their mobile in the next year.

9. Most consumers prefer text to video for news: Although publishers and technology platforms are pushing online news video hard for commercial reasons, we find evidence that most consumers are still resistant. Three-quarters of respondents (78%) say they still mostly rely on text. When pressed, the main reasons people give for not using more video are that they find reading news quicker and more convenient (41%) and the annoyance of pre-roll advertisements (35%)

10. Trust in news is highest in Finland (65%) and lowest in Greece (20%). Almost everywhere, editors and journalists are trusted less than news organisations.

11. Algorithms filter news (out): We find strong concerns that personalised news and more algorithmic selection of news will mean missing out on important information or challenging viewpoints. Having said that, we find that young people are more comfortable with algorithms than with editors.

12. Digital native news platforms not as trusted for serious news as traditional platforms: Media companies that have nailed their colours to a distributed future like BuzzFeed are gaining ground in terms of reach. But these new brands and platforms are mostly used as secondary sources and for softer news subjects. Main usage online remains with brands that have a strong news heritage and have been able to build up a reputation over time.

The Digital News Report is available to download free here.

Caroline Lees is the Head of Communications at the Reuters Institute for the Study of Journalism. She is the former editor of the European Journalism Observatory’s English language site. She is a British journalist and has worked for The Sunday Times, London, for seven years including time spent in Delhi as South Asia Correspondent and as a news reporter and arts correspondent. She has also worked as foreign editor and assistant editor of The Scotsman, and for the Economist and Telegraph Media Group.
» Digital News, Media Economics, Recent » 12 Key Findings From The Digital...