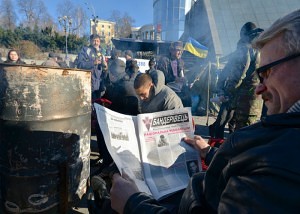 Media pluralism has strengthened in Ukraine over the last 18 months. Online news platforms played a crucial role in the independent reporting of the protests, which contributed to their establishment as important agenda-setters. Direct state censorship has been lifted after several years of pressure. However, major mainstream media, particularly TV channels, are still instrumentalized by their owners to pursue political interests.

Switching between Ukrainian TV channels can leave a confusing impression: while the news programs of some TV stations offer lengthy reports on certain political actors’ wrongdoings, others are completely silent, or offer alternative stories that instead point to other political ‘villains’.

Telekritika, a Ukrainian NGO, has been monitoring violations of professional standards by the mainstream media. It has found evidence of  repeated “oligarchical battles” occurring in the media owned, or controlled, by the oligarchs.

Telekritika reported that Inter, a popular TV channel associated with oligarchs Dmytro Firtash and Serhiy Lyovochkin (both of whom were close to fugitive ex-President Viktor Yanukovych), has been “devoting” a significant share of its content to alleged corruption by another influential oligarch, Ihor Kolomoysky.

Kolomoysky, who has been in a fierce confrontation with Firtash and Lyovochkin, pays them back using the same methods. His TV channel, 1+1, has been running numerous stories “uncovering” the alleged misdoings and shady pasts of Kolomoysky’s enemies.

Media clashes between oligarchs are not limited to these two TV channels. Nor are they a novelty for the country’s media environment.

Ukraine’s media has been dominated by big owner-oligarchs since the middle of the 1990s, following questionable privatization that gave rise to the so-called financial-industrial groups. Those groups accumulated enormous capital and developed close ties with the political establishment – or became part of that very establishment.

Media ownership is viewed as a useful business and political tool

Analysts have noted that appropriation of media by large financial-industrial groups was accompanied by decreased autonomy and press freedom. Furthermore,  Ukrainian oligarchs have been perceiving their media assets not as self-sufficient businesses, but rather as a useful supplement for their major businesses and political leverage.

This has meant that the country’s citizens have been exposed to often biased, yet pluralistic information from different media, owned by competing oligarchs.

While the oligarchs’ press wars have been shaping Ukraine’s media landscape since the early 2000s, Yanukovych’s administration managed to silence discontented media owners. This resulted in the deterioration of the already weak media pluralism.

Since the EuroMaidan victory in 2014, pluralism of information increased. But so did oligarchical media wars.

“Rich investors who wanted […] an instrument for political influence, a free advertising channel or a status accessory supersaturated the market with subsidized media organizations and nearly demolished the very possibility to develop media as a business,” Dovzhenko said.

A handful of oligarchs are setting the mainstream news agenda

As a result, a handful of media owners, most of whom have strong political affiliations, have set the mainstream news agenda. “This may look like pluralism, but in reality it restricts freedom of speech, because when reporting on this or that news, a journalist is guided by interests of his/her media owner, not by public interest,” Dovzhenko said, adding that he has recently observed numerous cases when journalists from leading media have avoided covering important issues, not because of a direct ban, but rather because they think coverage of the issue won’t benefit their organisation’s owners.

While the recent round of oligarchical battles arouses a feeling of déjà vu among many Ukrainians, some hope Ukrainian journalists and civil society will manage to break this vicious circle.

There are signs that some journalists are questioning editorial controls.

Recently, a correspondent from Kolomoysky’s 1+1 TV channel posted on her Facebook page about a manipulative story run by her colleagues on Mikheil Saakashvili, a recently appointed governor of the Odesa region and an ex-President of Georgia. “Fellow colleagues, why do you do that? Hasn’t anything changed in your attitude to such things after Maidan?”, she asked.

The reporter, Mariya Vasilyeva, added that journalists should just say ‘no’ to such ‘assignments’. “Say ‘no’. This is simple”. The eagerness of Ukrainian journalists to say ‘no’ to non-transparent editorial decisions and practices may become crucial for achieving true independence of journalists and media freedom in the country.