January 17, 2017 • Ethics and Quality, Media and Politics, Recent • by Thomas Schmidt and EJO 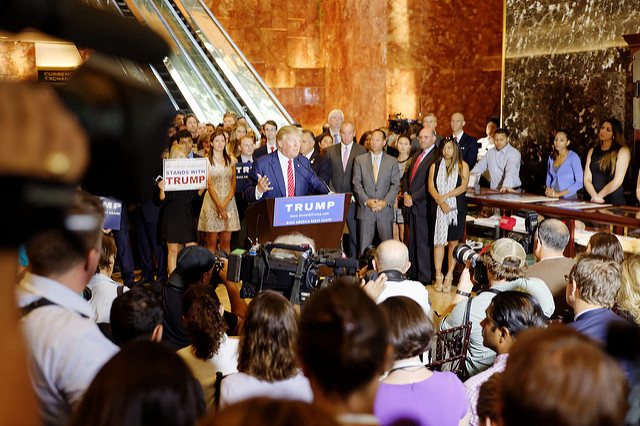 Donald Trump plans to change the way the White House meets the media.

Days before Donald Trump’s inauguration as US President, journalists in the White House press corps are fighting to retain their unique access to the new administration. This week, Jeff Mason, President of the White House Correspondents Association (WHCA), met Sean Spicer, Trump’s new press secretary, to discuss reports that press conferences could be moved to a new, “larger” venue, away from the White House. This would allow more people to attend the briefings, according to Spicer, including bloggers, talk radio hosts and, possibly, members of Trump’s own staff.

For news organisations the White House remains a prestige beat but correspondents based there have become increasingly frustrated in recent years. Barack Obama was the first president to take full advantage of social media channels and bypassed the White House press corps on a regular basis. Important announcements were made on YouTube or the White House Facebook page. When Obama presented candidates for prestigious offices (for example Merrick Garland as a candidate for the Supreme Court), the press office produced professional videos that were widely and routinely embedded directly on news websites.

“President Barack Obama,” wrote Jim VandeHei and Mike Allen in a scathing critique in 2013, “is a master at limiting, shaping and manipulating media coverage of himself and his White House.” 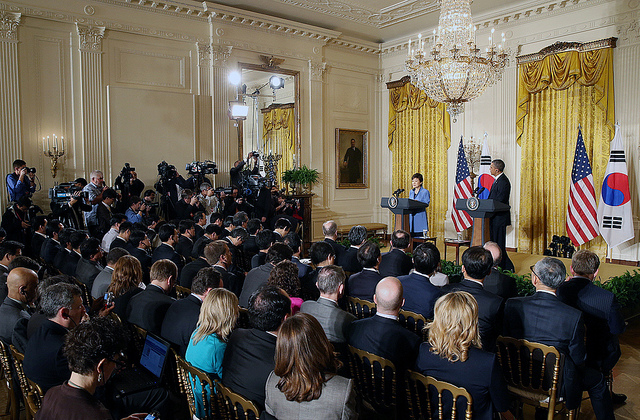 The White House press corps have long held unique access to the US administration.

Turning media outlets against each other?

But Obama was cordial in tone and Trump is not Obama. The Washington press is now faced with  a “hellscape of lies and distorted realities,” as the Washington Post’s ombudsman Margaret Sullivan put it.

Washington correspondents have a growing list of concerns about how the new administration plans to treat them. This list grew longer last week after Trump’s first press conference. Over 100 journalists crammed into a theatre in Trump Tower. They were joined by members of Trump’s family, as well as his staff, who cheered and applauded many of his statements as he spoke.

Trump used the press conference to attack the assembled press. He criticised journalists from various media outlets for publishing ‘fake news’, refused to take questions from a CNN reporter and called Buzzfeed, a ‘failing pile of garbage’ for publishing the controversial ‘Russian dossier’ about him.

Trump was later accused of trying to turn media outlets against each other selecting only a few to berate, while appearing more friendly to others. This tactic, if it was planned, appeared to have succeeded. No journalist publicly defended CNN or Buzzfeed during the event and, in the days after, many wrote critical stories of their colleagues’ decisions to report or publish the Russian dossier.

As Jim Rutenberg, writing in the New York Times, pointed out:

“A united front would have given the reporters stronger footing. But that was woefully lacking when Mr. Trump shouted down Jim Acosta of CNN, who said Mr. Trump’s press secretary, Sean Spicer, threatened to eject him.

The other reporters in the room readily took Mr. Acosta’s place, happy to have their own questions answered. But they could be next. They’re going to have to decide how much they want to abide by Mr. Trump’s decision to selectively quarantine colleagues whose coverage he does not like.”

The WHCA was founded in 1914 by journalists worried about (unfounded) rumours that Woodrow Wilson’s administration would hand-pick journalists to attend White House press events. The association is now responsible for allocating the 49 seats in the James S Brady press briefing room to major media organisations. The association has around 200 members, but Spicer described it as representing the “Washington elite media”. He argued a larger venue for press conferences would be “more democratic”.

“There’s a lot of talk radio and bloggers and people that can’t fit in right now and maybe don’t have a permanency because they’re not part of the Washington elite media, but to allow them an opportunity to ask the press secretary or the president a question is a positive thing,” Spicer said.

Spicer also reportedly told the WHCA during their meeting that he expected journalists to “behave with decorum” in future press briefings.

Relations between the office of the president and the press corps underwent various stages in the past decades. The postwar period was characterised by an obedient press. The political upheavals of the 1960s and the Watergate scandal in the 1970s inaugurated the era of a more assertive and aggressive media. The press’s self-image as a watchdog was reduced to the role of a lap dog during the George W. Bush years when reporters failed to debunk the administration’s faulty intelligence.

With President Obama, the White House press corps entered the era of the sidelined press. “Is there any point, anymore,” wondered Susan Milligan, a veteran White House reporter, in an analysis for the Columbia Journalism Review, ”to having a dedicated White House press corps, scrambling for any contact with the famously enigmatic president? At what point does spending 11 or more hours a day following around one man become a fool’s errand, better replaced by coverage of the White House and its occupants from afar?”

After their meeting Jeff Mason released a statement in which he said that Spicer had agreed to discuss any decision to move the press briefing room with the WHCA. “I made clear that the WHCA would view it as unacceptable if the incoming administration sought to move White House reporters out of the press work space behind the press briefing room,” Mason said. “Access in the West Wing to senior administration officials, including the press secretary, is critical to transparency and to journalists’ ability to do their jobs.”

An opportunity to pursue news away from official channels?

And yet, for some observers, these new developments also signal an opportunity. “Donald Trump and his forthcoming presidency,” wrote Jack Shafer, Politico’s senior media writer, “may be the greatest gift to Washington journalism since the invention of the expense account.” And he encouraged reporters to discard old routines and instead pursue news beyond the limitations of official access. “In his own way, Trump has set us free,” wrote Shafer. “Reporters must treat Inauguration Day as a kind of Liberation Day to explore news outside the usual Washington circles.”

Thomas Schmidt is a doctoral student at the School of Journalism and Communication at the University of Oregon. Prior to his academic career, Thomas was a reporter for Kleine Zeitung, Austria’s second largest daily newspaper, the monthly narrative magazine Datum, and ORF (Austrian Broadcasting Corporation). Thomas collaborated on this project with eleven of the media research institutes that comprise the EJO network.
» Ethics and Quality, Media and Politics, Recent » The White House Press Corps And...