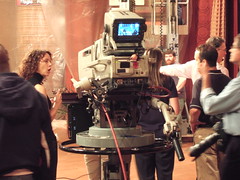 Wiebke Schoon, a researcher from the University of Hamburg, spoke euphorically of the “cosmopolitan turn” taken by media and journalism research.

Indeed, only a few years ago it would have been unthinkable: Nearly 1000 researchers congregated in the Hansestadt for the European Communication Conference. Formed in 66 panels and workshops, participants spent four days presenting research projects in a battery of 12-minute blocks. A 350-page documentation volume containing the various abstracts evidences vast distinctions among research questions and methodologies, as well as the numerous ways in which media systems and journalism cultures differ in Europe.

What a pity, however, that journalism is “Europeanizing” so little. Few journalists were observed eagerly exploring research results emerging from neighboring countries. Researchers remained in Hamburg among their respective groups. Such behavior will encourage the European “integration” to fade out in the distant future – before communicators begin learning from one another (and from research). Without adapting professional standards among one another it will be difficult to progress with the European integration.

At least some communications researchers are visible in the media. Among them is Miriam Meckel from the University of St. Gallen. In the German paper Handelsblatt, she recently addressed media professionals: “Journalism needs to stop complaining about disappearing business models, it should rather point out with self-confidence what it can achieve.” According to her a citation which for years inspired discourse among media practitioners is often referenced in amputated segments. At a hackers conference in 1984, Stewart Brand is quoted saying, “Information wants to be free, because the cost of getting it out is getting lower and lower all the time.” This is, as stated by Meckel, “what we have experienced for many years.” However Brand’s statement has a second part which, according to Meckel, is included only very rarely. “Information wants to be expensive, because it’s so valuable. The right information in the right place just changes your life,” said Brand. Certainly this can be viewed as an invitation (hint, hint) to all who still believe high quality journalism can be offered for free to think a bit harder…

Most researchers, by the way, seem to rather enjoy a niche existence in shady empire of public neglect. Before the committee in Stockholm announces its decision, even future Nobel Prize winners tend to continually be “no names” among journalists. Many other human beings, however, resort to absurd tricks in order to gain public attention and appear on TV screens. If media researchers Bernhard Pörksen and Wolfgang Krischke (University of Tübingen) are correct, we are on the way to becoming a “casting society,” where image and ego fuse and can no longer be identified separately. A “culture of permanent self-presentation and media orchestration” is being generated – driven by old and new media, in particular by TV and the Web.

What could be better than analyzing the promoters of this casting society – the culprits who benefit commercially from the offenders of self-presentation and as well as their victims, those addicted to existing at the center of public attention? This kind of analysis is exactly what Pörksen and Krischke have undertaken – however, (and this is the really sensational part of the story), they haven’t done so alone but rather together with 25 students who came across approximately the same number of prominent interview partners. The outcome is detailed in a very exciting book illuminating the casting society from all imaginable perspectives.

Among the interviewees are three media stars from the scientific community: German media philosopher Norbert Bolz, Austrian media economist Georg Franck and Dutch media psychologist Jo Groebel. The latter considers it “scandalous“ that close to no substantial, continuous voice from the communication sciences has been heard in the discourse about media policies during the last 10 to 15 years. Nice, however that he does not even try to intertwine his own TV prominence with his achievements as a researcher. Says Groebel,“This is a self referential system: Prominent is who is prominent.” According to the psychologist, whoever is able to provide media-compatible statements will be invited to do so by the media…over and over again.

European Journalism Observatory co-founder and until 2018 Professor of Journalism and Media Management at the Università della Svizzera Italiana in Lugano. Frequent contributor to Neue Zürcher Zeitung (NZZ) and Der Tagesspiegel (Berlin), as well as to the specialist publications Schweizer Journalist and Der österreichische Journalist.
» Ethics and Quality » A “Casting Society”