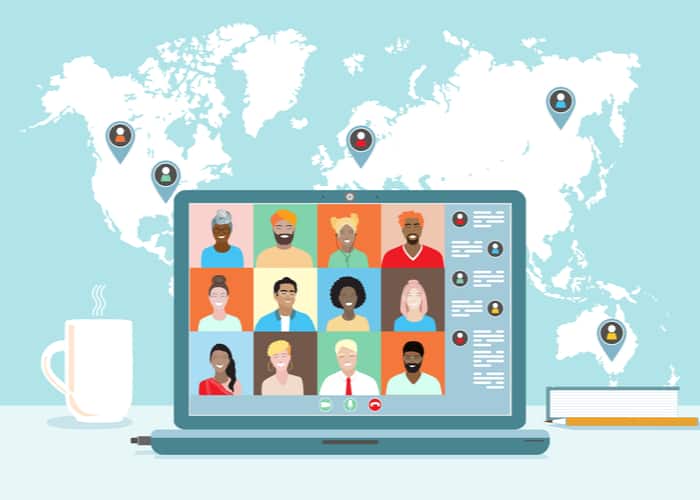 ‘The new normal’, thanks to the Covid-19 pandemic, is a post-apocalyptic-type term that has become part of our everyday vocabulary.

The phrase certainly applies to the education sector, which was upended by lockdowns and other measures used to curb the spread of the virus. Of course, online learning became a key component of education’s ‘new normal’. However, finding platforms and mechanisms that internationalise teaching and facilitate seamless engagement and collaboration between people separated by oceans is an educational pursuit that predates the pandemic.

One particularly promising trend in communication and journalism education is Virtual Exchange (VE). It is the subject of a paper by Roxane Coche from the University of Florida. Published in the Journalism & Mass Communication Educator journal, it describes a six-week VE

Coche’s sports communication students worked with students from a journalism course in the UK to develop digital skills and intercultural competencies.

Each university set up a seminar room with webcams for their students, and in February 2020, the two groups met via Zoom. In the weeks that followed, the students were tasked with exploring cultural differences between American and British soccer coverage and minority representation, equality, and accessibility in the sports industry.

However, Coche explains that, after only two weeks, the project logistics were compromised – first by a teachers’ strike in England and then by the Covid-19 pandemic. But the students continued to collaborate on multimedia projects, analysing how British and American media covered a soccer-related topic of their choice.

Of course, with the pandemic and lockdowns in full swing, they were no longer gathered in seminar rooms on their university campuses. Instead, they were speaking to each other from their homes- having added WhatsApp and Facebook Messenger to their modes of communication.

At the end of the project participants reflected on their experience in a short essay or video. Among other things, they were supposed to evaluate the experience, describe what they learned during the VE, highlight any challenges, and make suggestions for improvement.

In her paper, Coche analyses the reflections of the course participants from the US.

“The VE project opened their eyes to the idea that England is an entirely different culture, despite the shared history between the two nations,” she notes.

Coche illustrates this in a quote from a participating student, who said: “The rules and restrictions seemed to be much stricter in the UK, and even the thought of going into a locker room after a game seemed ridiculous for our British counterparts.”

The American participants concluded that situations “can be seen and analyzed so differently depending on the country” because “different cultures view things in different ways”. However, despite these highlighted differences, they agreed that sport has the “power to unite people”.

“Though we lived in entirely different parts of the country and world it was amazing to see the similarities and passion for sports come together,” one respondent reported.

Coche asserts that the project helped students understand that some “topics that transcend continents and are shared around the world” bring people together regardless of their differences. She notes that the students did not just explore the cultural differences between the US and the UK, they also learned to appreciate them.

The article makes it clear that the virtual exchange approach is not without its challenges. It identifies, for example, the issue of intercultural communication.

Although all students in this project spoke English, there were a few comprehension problems, as American English sometimes differs from British English. For example, the expression “let’s table” in American English means to postpone the discussion of something, but in British English, it means to discuss something immediately, which caused some irritation among participants.

The time difference also caused a few scheduling and communication problems. One solution was to do the work asynchronously and to communicate via email and messenger.

The American students “learned how to stay patient and not get frustrated” during the collaboration, Coche claims.

These participants’ feedback suggests that, despite the challenges, the experience was worth it. One student even described it as “an eye-opener”. Another said the VE offered “a global view and experience that isn’t presented very often”.

She does stress that she was basing her conclusions on the reflections of a small sample size of 17 students and that she had not included the British participants’ perspectives. This recognised weakness is an important sidenote – particularly as the project focuses on intercultural exchange. However, there are valuable lessons to be learnt from this project about advancing journalism education in the era of post-covid globalisation.

Read the full paper: Coche, R. (2021). Course Internationalization Through Virtual Exchange: Students’ Reflections About “Seeing the World Through the Lens That is Soccer.”

If you liked this story, you may also be interested in: The rise and stall of  women experts on UK news

Tina Bettels-Schwabbauer is the editor of the German EJO website. She studied online journalism at the University of Applied Sciences in Darmstadt, Germany. After her studies she worked as an online editor for a retail industry newspaper in Germany, then moved to Australia for three years where she lectured in Media Studies at the University of Adelaide. From 2010 to 2014 she researched and lectured at the Erich Brost Institute for International Journalism and the Institute for Journalism at TU Dortmund University. During this time she was also editing the German portal of the EJO website. During 2014 and 2015 Tina managed a journalism education programme for High School students at a German political foundation. In September 2015 she returned to EJO. Her research interests include cross-border journalism, international media systems, journalism cultures and journalism education, the latter with a focus on CEE countries which is also the topic of her PhD project.
» Recent, Research, Technology » Advancing journalism education through virtual cross-border...