Climate change is a global problem, and according to UN  Secretary-General Ban Ki Moon, it is currently the “greatest challenge facing humanity.” But it is a long-term, slow developing, and often invisible phenomenon so most people do not experience it first hand. Research has shown that news outlets are people’s main source of information on climate change. But how much attention do media professionals pay to the topic?

A team of researchers from the universities of Hamburg and Zurich addressed this question by  analyzing the amount of coverage devoted to climate change in relation to other topics covered by mass media outlets. The volume of coverage signals the issue’s relevance and is likely to have an affect on the general public’s awareness, as well as on the priority politicians give to it. As climate change affects societies around the world, the project analyzed newspapers from 27 countries – including industrialized states, emerging economies, and developing nations from all continents – all with different degrees of vulnerability and varying responsibilities to reduce greenhouse gas emissions and carbon dependencies.

The study reveals that climate change is a relevant media topic in all countries and that coverage has increased considerably during the period analyzed (1996-2010). In most countries, media attention increased drastically in 2006/2007 and remained at a high level through the end of 2009. On average, climate change coverage accounted for 0.62 percent of all articles published between 1997 and 2009, a considerable amount when compared to the wide range of topics covered by newspapers, including contemporary social problems such as unemployment and other cultural and economic affairs. 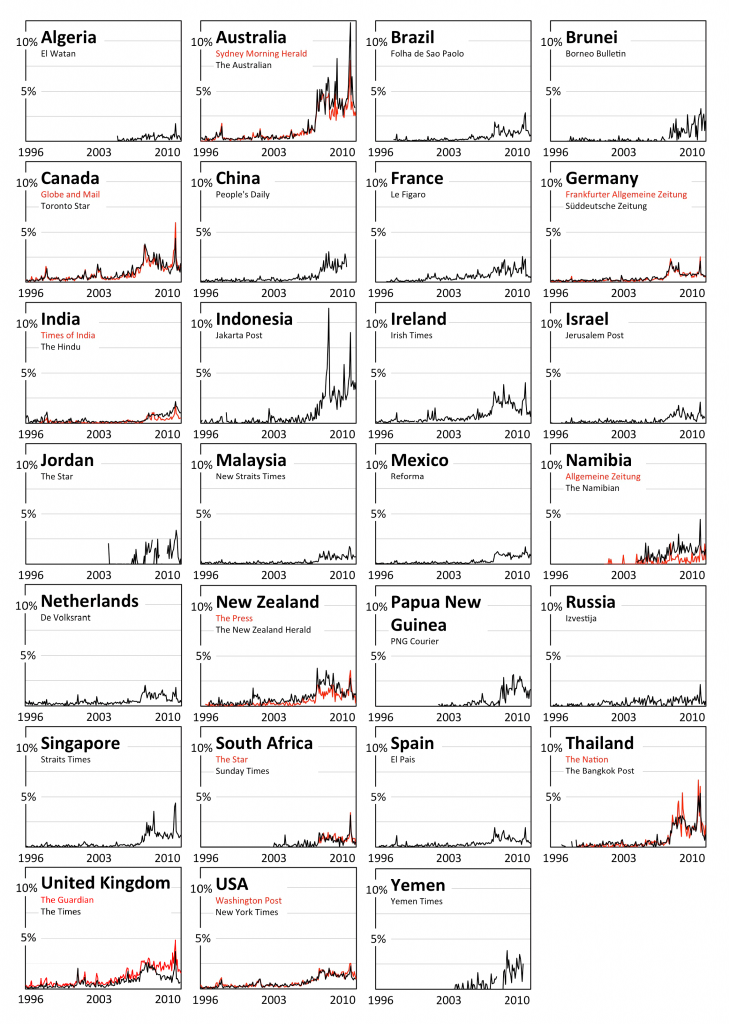 Media attention for climate change across the world (Graphs show percentage of the respective newspapers’ coverage that refers to climate change; gaps in graphs are due to missing data).

As is shown in the figure above, media attention for climate change did not develop linearly, with the collected data showing  short-term fluctuations featuring high peaks at times. In order to explain what caused these ups and downs, the research group tested the statistical influence of several factors:

Because such an analysis requires a great deal of contextual data, this portion of the study was limited to three rather diverse countries: Australia, Germany, and India.

Interestingly, weather and climate characteristics were not found to be important drivers of climate change coverage. In both Australia and India, neither long-term temperature developments nor extreme events such as storms or floods served to systematically increase media attention for climate change. Only in Germany, floods – and most likely one extreme weather event, the ‘‘flood of the century’’ in 2002 – triggered issue attention. Similarly, scientific publications showed no effect. The only (semi-) scientific events that influenced issue attention, at least in Germany, was the release of assessment reports from the UN’s Intergovernmental Panel on Climate Change (IPCC). In contrast, political events and activities, as well as the activities of environmental NGOs, are important drivers of media attention for climate change in all three countries. In Australia, Germany, and India, UN climate summits strongly increased media attention, as did the activities of large international environmental groups such as Greenpeace and the World Wildlife Foundation (WWF). Additionally in Australia and Germany, domestic politics also have a significant impact.

In a second paper, the research team compared all 27 countries and asked what factors contribute to varying levels of media attention. According to the researchers, political issues were critical to climate change coverage, whereas susceptibility to the negative consequences of climate change played only a subordinate role.

In a first step, the study compared countries according to their responsibility to act. The Kyoto Protocol obliges only certain industrialized countries to engage in climate mitigation, i.e. to limit their greenhouse gas emissions. Results showed that media attention in these countries is clearly greater than in those without international obligations – which suggests that the political relevance of the issue in a particular country has an effect on the amount of media coverage.

In a second step, the scientists focused on industrialized countries and considered their varying degrees of carbon dependency. The researchers show that media attention is higher in more carbon-dependent countries, i.e. in countries where the pressure to change lifestyles and modes of economic welfare generation is especially great.

The prime example of a carbon-intensive economy is Australia, where previous research indicates that debate about whether and how to reduce carbon emissions has become contentious. Politically conservative, (neo-) liberal, and industry actors fight against greenhouse gas regulations, whereas environmental groups and politicians from the left push for ambitious climate policies. These conflicts are obviously reflected in extensive media coverage – the country has the highest level of media attention in the study. Germany in contrast, is an industrialized country with a rather low level of carbon dependency, and at the same time, shows a relatively low level of media attention concerning climate change.

Finally, the research team compared countries with different degrees of vulnerability – and found mixed results. Among the group of emerging economies and developing countries, vulnerability and issue attention correspond to some extent, but for the industrialized world this was clearly not the case.

Overall, the results suggest that news media coverage of climate change is driven by politics rather than by weather and climate factors, or by the knowledge production of climate science.