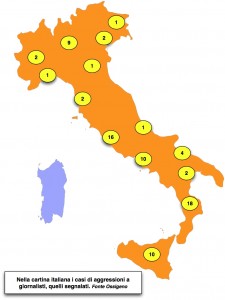 It has become a dangerous enterprise to write, question and investigate.

According to a comprehensive report created by the Osservatorio Ossigeno 2010 (Oxygen Observatory 2010), the journalistic profession in Italy is the object of dangerous harassment. Such a conclusion isn’t merely in reference to the “gag laws” currently under examination by the Italian Government, but rather the possibility of dying for having done one’s job. The report, released at the Circolo della Stampa (Press Club) in Milan, focuses on the hundreds of journalists who’ve weathered serious threats, pressure, and intimidation of all kinds, including the most serious of threats, obliging many to live with a police escort.

The extent of the phenomenon in Italy speaks for itself: at least 12 journalists have police escorts and 78 cases of threats have been formally reported (with 23 cases involving the entire editorial staff), affecting a total of more than 400 journalists.

Obviously these numbers refer only to those who’ve reported the threats, and it’s feared that this “cancer” runs much deeper. Those who pay the highest price appear to be the freelance journalists – men and women with temporary contracts who lack the support of a newsroom. The Ossigeno Report indicates that 52 of the journalists who filed reports with the police hold steady jobs, 18 have temporary contracts and 8 are freelancers. Physical aggression was reported in 13 cases, and included 15 instances of property damage.  Journalists also reported 34 cases of intimidation and threats of verbal and physical violence, and filed 16 official complaints to the police. Incidents ranged from cars set on fire to bullets and decapitated animal heads delivered to editorial staffs. Unsettling letters containing threats surface as well, such as those addressed to journalist Sandro Ruotolo, currently under investigation by Rome’s DIGOS police (investigative and special operations unit). Mr. Ruotolo does not have a police escort and a distinct unease can be detected in his writing, however this hasn’t stopped him from doing his job and describing Italy as he sees it.

Other journalists may be accompanied by escorts, yet the penetrating power of these all-too-clear messages still seems somewhat unstoppable. The report cites the example of Rosaria Capacchione, a reporter for the Naples daily Il Mattino, who accepted the services of a police escort after receiving numerous threats from the Casalesi organized crime clan. According to the report, during a book presentation last February at the Feltrinelli bookstore in Naples, Ms. Capacchione was approached by the cousin of clan-member-turned-state-witness Antonio Iovene. Mr. Iovene questioned some of the articles she had written the previous year regarding another high-profile clan member, Riccardo Iovene, arrested in January 2009 with the perpetrator of the Castelvolturno massacre, mafia boss Giuseppe Setola. Present in the bookstore at the time, in addition to her escort, were dozens of people, including high-ranking Carabinieri (police) officers and the Italian magistrate Raffaele Cantone.

Lirio Abbate hasn’t been any luckier.  Mr. Abbate is the author of numerous publications describing ties between the mafia and the Italian political class, such as I Complici: Tutti gli uomini di Bernardo Provenzano da Corleone al Parlamento (The Accomplices: All of Bernardo Provenzano’s Men from Corleone to the Parliament), which have been circulated widely in Italy. In September of 2007 his investigative skills and ability to uncover murky facts were rewarded with a bomb under his car in Palermo. That attempt was followed by numerous threats relayed in anonymous letters delivered to the newsrooms where Abbate works.

These are just three striking examples pruned from a far wider issue which finds its common denominator in talented journalists committed to reporting the facts every day. Sicily, Calabria and Campania have often made headlines due to the chokehold criminal organizations have on their territory, yet according to journalists’ associations, the situation up north in Milan is hardly comforting.

Reporters say a shameful attitude is slowly infiltrating the north of Italy, affecting easily recognizable journalists like those working at smaller papers or covering local news. Sure, these journalists might not receive envelopes containing animal remains, but there are other deterrents, like advanced requests for “damages” or promises of political ridicule.  Some reporters say that at times they’re refused interviews with particular institutional figures if the figure in question wasn’t fond of an unflattering media report or one that may have challenged administrative policies and programs.