U.S. Coverage of Conflict and the Media Attention Cycle 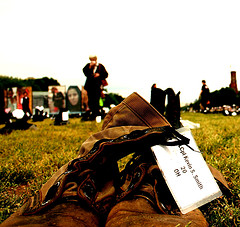 Modern wars are fought on at least two frontiers.

There’s the military battlefield, and then there’s the media front, where the visceral darkness of war (collateral damages, tragedy, human suffering) must be distorted in order to mobilize public attention and support.

In his contribution to Peace Journalism, War and Conflict Resolution, a compilation of essays on the subject of peace journalism by Richard Keeble, Stephan Russ-Mohl summarizes the American media coverage of the recent Iraq war, distinguishing three phases: Phase #1, during which most members of the American media became victims of government propaganda, reporting on Saddam Hussein’s WMDs and close connections to Al-Qaida; Phase #2, when the media discovered they were (as happens in most wars) misled by the government and began a period of self-reflection and criticism; and Phase #3, when the media abandoned war coverage while the war itself continued.

Russ-Mohl’s research was conducted using economic theory as a methodological approach, providing  insight as to why it is so difficult for war reporters and editors to fulfill their most noble mission: keeping distance in order to uncover truth.

European Journalism Observatory co-founder and until 2018 Professor of Journalism and Media Management at the Università della Svizzera Italiana in Lugano. Frequent contributor to Neue Zürcher Zeitung (NZZ) and Der Tagesspiegel (Berlin), as well as to the specialist publications Schweizer Journalist and Der österreichische Journalist.
» Ethics and Quality, Specialist Journalism » U.S. Coverage of Conflict and the...