Wolfgang Blau: What Is Mobile Journalism? 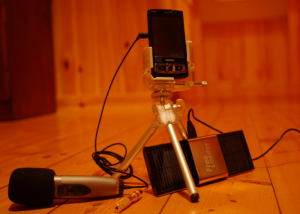 Defining a whole genre of journalism – especially the fastest growing genre there is – by its means of production instead of its means of consumption, might be one reason why so much of today’s ‘mobile journalism’ is not optimised for mobile consumption yet.

As an industry and a profession, we know far too little about how to produce mobile-optimised journalism on an item-by-item basis as well as how to create overall editorial propositions that pay tribute to smartphone readers’ needs and to the technical capabilities of smartphones.

When you google ‘mobile journalism’, the majority of results lead you to mobile production gear and conferences about mobile production. This is understandable, but simultaneously it is as absurd as defining print journalism as ‘journalism that has been gathered, edited and created on sheets of paper before distributing it via web, print or broadcast’.

Now let’s hope there will be more conferences soon about how to produce journalism specifically for mobile devices. Affordable mobile production gear is not the issue anymore and never was a prerequisite for producing more mobile-friendly journalism.

Wolfgang is The Guardian's Director of Digital Strategy and a member of Guardian News & Media's executive committee. He is a Vice President of the Global Editors Network in Paris, a fast growing organization of more than 1.500 editors from 85 countries focusing on digital media. He is a juror of the International Data Journalism Awards and the British Newspaper Awards.From March 2008 to February 2013, he was the Editor-in-Chief of Zeit Online, the sister publication of Germany's newspaper Die Zeit.
» Short stories, Specialist Journalism » Wolfgang Blau: What Is Mobile Journalism?