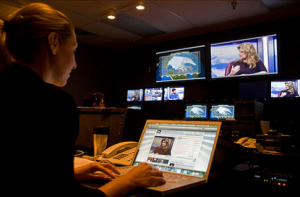 Universities are increasingly reporting their own science research, or using public relations professionals, rather than relying on journalists to interpret their findings.

Universities and research institutes are increasingly presenting their own research results, rather than relying on science journalists to interpret and communicate their work. Research is published directly in magazines, blogs, and social networks, often managed by by public relations professionals and researchers, according to a survey of Swiss universities.

Marius Hasenböhler, head of communications at the University of St. Gallen, said his university had a deliberate strategy to position itself as a “place of thought” by focussing on socially relevant research results. Hasenböhler said he was unsurprised by the developments in the way universities communicate science because research topics are of more interest to the media than institutional news.

Hasenböhler added some universities have communication officers within institutes and faculties: “many things, which are not particularly sophisticated or linked to institutional politics, are now communicated in a decentralised way,” he said.  For the University of St. Gallen, as part of its communication strategy, it is also desirable that “researchers and teaching staff communicate with the public directly within their area of expertise,” Hasenböhler said.

Universities have also begun to compete with the few existing professional magazines that deal with research and science. Most universities surveyed distribute their own magazines for free.

In another initiative aimed at encouraging science journalism, the Gebert Rüf Foundation and the Mercator Foundation are supporting the popular Swiss tabloid newspaper 20Minuten.

20Minuten, which is published on weekdays in the three Swiss languages, publishes two pages of science news every week, funded by the two foundations. Its aim is to raise interest in science and research among new target groups, particularly young readers and those unfamiliar with the topic.

Philipp Egger, director of the Gebert Rüf Foundation, does not consider this funding to be sponsorship. Instead he describes it as an “exchange of services”.

However, some experts identify collateral damage for journalism here. They believe that by supporting 20Minuten, the foundation subsidises Tamedia, the media group that owns the newspaper.  Tamedia has already drastically cut budgets for science reporting on other fronts (for example in its quality newspaper Tages-Anzeiger).

In a similar sponsorship arrangement, science coverage by the Swiss news agency Schweizerische Depeschen-Agentur (SDA) is financed by Swissuniversities (the successor organisation of the Conference of Directors of Swiss Universities) and by the ETH Zürich. Winfried Kösters, deputy editor-in-chief of SDA, emphasises that the agency’s editorial independence is guaranteed and established in contracts.  She denied that Swissuniversities support was a general model for future journalism funding.

One chapter deals with recent research, based on content analysis, that reveals the media has not neglected social sciences and humanities, compared to natural sciences, technology and medicine. Researchers, Anna Maria Volpers and Annika Summ (University of Münster), analysed German print media – 13 newspapers, two news magazines and one news website – and found that social science reporting is now spread over different media beats.

Also interesting is the chapter contributed by Senja Post (University of Zürich) on media reporting and climate research. According to Post, a complex interaction between researchers and the media seems to have led to considerable distortions in the perception of climate change, whenever uncertainties in research have to be reported.

Post reports that journalists expect clear statements from climate change scientists, and like to emphasise them. This, in turn, apparently leads to a sort of spiral of silence on the side of researchers. Those who consider it important to be open about any uncertainty, speak less often to journalists, preferring to publish themselves via mass media.

On the other hand, those researchers, who think that climate change is “caused by mankind, dangerous, historically unique and predictable,” contact the media more often.

The editors of Changing Science Communication refer to two other unsolved problems in their field. On the one hand, the variety of online platforms raises problems of selection and credibility, especially for unfamiliar topics.

The book’s editors also assert that the biggest challenge for science communication on the web is to reach the right readers. Readers who do not usually seek out news about science, but who, until now, might at least have noticed scientific topics in traditional media, can now avoid these subjects altogether online. Algorithms intensify this by offering only content which matches the users’ interests on the basis of past user preferences, the editors argue.

It is easy to spin oneself into an information cocoon, and therefore the so-called “knowledge divide”, between people interested in science and those who are not, can only continue to widen.

Georgia Ertz has evaluated the press releases issued by the Swiss universities and translated this article into English.