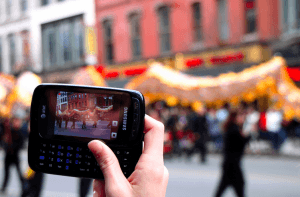 One of Europe’s largest publishers, Axel Springer, has gone into partnership with the world’s largest smartphone maker, Samsung, to launch Upday, a mobile news app in which content created by the German publisher will appear exclusively on the Korean company’s phones in Europe.

Upday, which launched as a beta version earlier this month in Germany and Poland with editorial in both countries’ languages, will become available in every European country in early 2016.  Content on the app will be created and curated by a dedicated editorial team at Axel Springer, which also publishes German newspapers, Bild and Die Welt and has 14,000 employees. The company also owns platforms across central and eastern Europe including Fakt, Poland’s biggest daily tabloid newspaper and auto.cz, the biggest Czech internet car portal.

News stories on Upday will be divided into two sections ‘Need to know’ – generated by local Axel Springer reporters, and ‘Want to know’ – which will display stories “algorithmically tailored to customers’ individual interests” – gleaned from contextual signals such as location and interests. This content will be largely curated from partner publishers, with links to their sites. Axel Springer will reportedly pay other publishers ancilliary copyright fees for any content it aggregates in the app.

As audiences continue to move towards mobile platforms news organisations are looking for new ways to reach consumers on their phones, in particular via apps. While most recently launched products, such as Facebook’s instant articles and Snapchat Discover, as well as Apple’s News app, offer platform access to multiple news companies, this partnership only gives access to Axel Springer and its selected partner publishers.

A spokeswoman for Samsung would not confirm whether the company will pay Axel Springer for content it provides for its devices. However the mobile phone company has evidently chosen not to hire its own editorial staff, unlike Apple, which has hired in-house editorial teams to prepare content for its own news aggregator, ‘News’.

At least at the beginning, Upday won’t be pre-installed on Samsung phones, users will have to download it from the Google app store.

Despite the growing popularity of Apple i-phones in Europe, Samsung phones are still the best-selling models in Germany and France.

Axel Springer is an active investor in start-ups. It recently invested in pay-per-article start-up Blendle.  But the company is clearly hedging its bets on which digital news content models might deliver the best future revenues.

Caroline Lees is the Head of Communications at the Reuters Institute for the Study of Journalism. She is the former editor of the European Journalism Observatory’s English language site. She is a British journalist and has worked for The Sunday Times, London, for seven years including time spent in Delhi as South Asia Correspondent and as a news reporter and arts correspondent. She has also worked as foreign editor and assistant editor of The Scotsman, and for the Economist and Telegraph Media Group.
» Business Models, Digital News » Upday: Axel Springer And Samsung Launch...