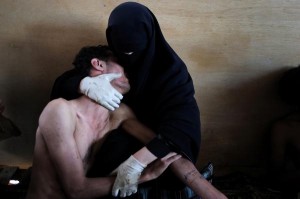 Reminiscing back to 2011 evokes a clear sensation: last year was full of historical events.

The Japanese earthquake. Arab Spring. Tahrir Square. Utoya Island massacre. The year 2011 was significant due to what many observers saw as the changing of the guard between social media and traditional media – with the Arab Spring protests (which relied heavily on social media) being the clearest example of this transition.

However it’s interesting to note that 2011 was a year clearly defined by images; and it is equally interesting to note how these images were published by traditional media outlets which, in the minds of many, play a less important role in constructing the imagination of the masses.

The World Press Photo exhibition, housed in Berlin at the Willy-Brandt-Haus, displays the winning photographs from the 2011 World Press Photo Awards.  The exhibit, which runs until July 1st, is a perfect example of how images dominated our press landscape in the previous year.  In total the exhibit features 158 photographs taken by 57 photographers, including the 2011 winner, Samuel Aranda and his emotional “picture of the year” entry. The photograph, taken in the Yemeni town of Sanaa during protests against President Ali Abdullah Salih, is already one of the most famous pictures from this historic period.

World Press Photo has honored the best journalistic photos since 1955, part of the organizations goal to break barriers between photojournalism and a public who is often unaware of the skill and professionalism needed to produce quality and informative photos. In Berlin, visitors can see these stunning and meaningful pictures without the ephemeral frame of the traditional media.

Among the photos displayed – David Guttenfelder’s images depicting the conditions of displaced people from Fukushima, Tomas Lazar‘s protest photos taken during the New York City Occupy demonstrations, and Niclas Hammarstrom‘s impressive pictures from Utoya Island taken after Anders Behring Breivik’s massacre – are among the best of the collection.

All the images show once more how photojournalism is still one of the strongest tools for Zeitgeist representation, a point proven when viewing Simon Norfolk’s pictures from Afghanistan. The British photographer spent time there in 2010 and 2011 to immortalize the Afghan postwar period.  The photographer strongly relates his work to John Burke‘s, a photographer who spent time in Afghanistan during the Afghan War in the 19th century. The series delineates the two different eras of photojournalism; a time when the profession was prestigious and highly regarded, and a time in which photographers working for traditional outlets are denied the public recognition they deserve.

The greatest merit of the World Press Photo contest and the Berlin exhibition (the first of many events in a series) is to give visibility and attention to photojournalism by honoring photographers and their work.  Ultimately the organization hopes to raise the profile of photojournalism by exposing the profession to mainstream audiences.

Philip Di Salvo is a post-doctoral researcher based at the Institute of Media and Journalism of the Università della Svizzera italiana (USI) in Lugano. His main areas of research are whistleblowing, investigative journalism, internet surveillance and the relationship between journalism and hacking. At USI, he also teaches journalism at both the bachelor's and master's levels. Philip received his PhD in Communication Sciences from USI in 2018 with a dissertation on encrypted whistleblowing platforms in journalism. He is also a lecturer at Milan's Nuova Accademia di Belle Arti (NABA). As a freelance journalist, he writes about the social impact of technology for Wired, Motherboard/Vice, Esquire and other publications. Philip obtained a master's degree in Media Management from USI in 2012 and a bachelor's degree in Literature from Milan's Università degli Studi in 2010. He is the Italian editor of the European Journalism Observatory, based at the USI in Lugano.
» Digital News » World Press Photo 2011