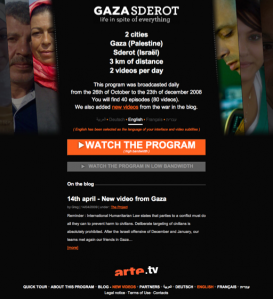 The debate surrounding the fate of print newspapers has remained stagnant for quite some time.

While scholars of journalism and publishers asked themselves when the deadline would come – the point of no return born of distorted dualism – the latest trend in journalism arrived.  A “webdoc” (shorthand for Web documentary) is a new, innovative form of reporting. There’s no paper involved, it’s true, but the webdoc draws inspiration from traditional print media, and in a way, gives back to print with the rich reportage it offers. Incorporating elements of classic Web projects, webdocs are essentially Internet sites featuring a creative array of tools to inform about a particular story or subject. An interactive fusion of photos, illustrations, videos, interviews, technical notes, and animations appear alongside everything from current events updated in real time to in-depth news reports.  In short, a webdoc is something  you can read, watch, listen to, or surf.

To reach professional levels in this medium, the support of a staff comparable to the editing staff of a newspaper is necessary.  Video producers, website programmers, and professional photographers and video editors are all essential  for managing technical aspects.  Not to mention archivists, who are indispensable figures as the webdoc sites often showcase  an exceptional collective memory of the events they describe.

A handful  of experimental sites created at the end of 2008 caused many information purists to turn up their noses with accusations that the sites made news overly “spectacular.” Other critics felt that news had been molded in order to “couple” better with the video components.  Yet nothing is further from the truth – it’s enough to simply take a look at various examples of webdocs to understand how innovative these news tools can be.

A shining example can be found in Prison Valley, an interactive documentary utilizing the Web to tell the story of Cañon City, Colorado, an American town occupied by 13 prisons.  Prison Valley incorporates video, social media, blogs, and even a mobile iPhone application —  all of which are used to allow audiences to discover, in journalistic fashion, a unique story.  Cañon City’s prison town was brought to the attention of many American broadcasters, thanks to debate provoked by the webdoc.  In addition, print newspapers covered the issue widely, deriving new lifeblood from the Web.

Another webdoc  focuses on the Middle East, sharing the incredible stories of lives divided in *Gaza-Sderot.  A split screen features– via episodes you can select – moments in the lives of individuals from each respective side. The two cities are described through interviews with men, women and children.  The videos, over 80 of them lasting two minutes each, portray scenes of daily life – the sport, the music, the passion and the pain. Clips feature subtitles in English, Arabic, Palestinian Arabic, French and German and can be seen in chronological order, or according to person or theme.  As in Prison Valley, the reportage is supplemented with social network tools, blogs, and live comments.

From Zero addresses a problem that continues to occupy Italian news space: the earthquake in Abruzzo, at l’Aquila. “We can follow from up close, side by side with the main characters, what you usually don’t see and what isn’t spoken about – the daily life of those who deal with the emergency and slowly build a way out of it,” reads the project’s introduction.  The lives of emergency workers,  doctors and  builders involved in the reconstruction are explored, as well as those of citizens awaiting homes.  From Zero created an accessible, sharable archive open to all, where each day a new episode is uploaded. Once again, newspapers utilized From Zero to pick up on material only available on the Web, giving the story resonance and bringing out details in reporting that had only been touched on previously.

Another spectacular work in which the user isn’t simply the “reader” but a real and true user-spectator can be seen in Honkytonk.  A sometimes heartwrenching tale of Chinese miners, Honkytonk allows the user to navigate the experience, choosing where to go, selecting rides in mining carts or visits to the state mining complex in order to bring the tale to life.

The territory occupied by this new form of journalism moves remains “frontier territory,”  but the overall reception has been positive. Projects like these simply can’t be improvised, the work is expensive and demands a highly specific skill set. Yet journalists are tapping into their true calling, which is to investigate, to tell stories, and to make these stories available to the public in a form of distribution capable of mixing different media and surpassing the well-worn struggle between print and Web.

*Gaza-Sderot is a project distributed by Arte.tv, the website of ARTE, the Franco-German cultural channel in co-production with an Israeli team – Alma Films/Trabelsi Productions in cooperation with the college Sapir of Sderot, a Palestinian team – Ramattan Studios, a French documentary production house – Bo Travail! and the interactive production agency Upian.com