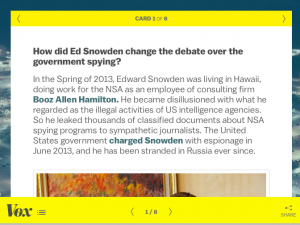 Allison Rockey is nothing if not game. Within the first minute of her presentation to a room full of experienced English journalists she admitted she a) wasn’t a journalist and b) had been in digital media about a year. And if that wasn’t enough, she delivered the information with a broad American accent and bubbly confidence. If the audience were a little taken aback, it didn’t take long to establish why she’d been chosen to speak at last week’s News Impact Summit in London.

Rockey is the Engagement Editor of Vox.com, a one-year old US news website whose mission is to ‘explain the news’ to an apparently vast, mostly mobile audience who find the current offerings of news services intimidating. Some might call it news for dummies.

Their point of difference is a ‘card’ system: essentially a set of simple cheat notes embedded in each story. A word highlighted in the copy indicates the presence of a card that a reader can easily click on – or swipe to – in order to find a definition, understand an acronym or gather some background data on the story as they’re reading it.

Vox.com’s set of cards (a ‘stack’) on ISIS, for example, has had ‘millions of views’ and is being constantly updated by the 35 strong editorial team, who encourage other users and organisations to use their card stacks and, ideally, embed them in their own stories, facebook pages or blogs. (Users are apparently five times as likely to interact with an embedded card stack, and 32 per cent of users who view one card will go on to read the entire stack.)

Rockey’s role as Engagement Editor might be seen in old parlance as a marketing role: she helps Vox journalists package their stories for maximum reach on social media – a faster, more effective way to introduce Vox to a wider audience than waiting for the slow growth earned via search engines. Given Vox Media’s explosive growth (their website claims 150m users per month), the proof seems to be in the pudding.

She used their recent coup – an hour-long interview with President Obama – as an example. Not only was the full interview available to watch in video format, Vox then repackaged their own exclusive into a variety of forms, from a snappy quote for Twitter to a series of short shareable videos for Facebook.

Rockey illustrated this with a two minute video grab of the interview, where Obama explains his view on foreign aid. The footage was overlaid with data in the form of snappy graphics (in front of Obama’s nose): a pie chart of the US foreign aid budget or a map showing the location of recipient countries. Its simplicity is enough to make a traditional political correspondent despair, but it’s hard to deny the concept has struck a chord.

By sending out video highlights packages, or sharing the most controversial quotes almost simultaneously to the release of the full interview, vox.com effectively mine their own exclusive; trumping their own content before their competitors can.

The Vox model for growth relies on readers’ enthusiasm to share content with each other – a human trait some might consider a risky premise on which to base a media company. Rockey seems confident about its future, but of course, she would.

Kim Wilson is the Editor-in-Chief of New Idea magazine in Australia and is currently completing a Masters degree in Public and International Law.
» Digital News, Short stories » Vox: Using Data To Tell (And...